More amazing news continues to seep out every week. This was something I missed for most of the last week, but was made public as early as April 8. Filmmaker Jeremy Lockyer Corbell, someone I’ve known personally since 2013, has been actively soliciting insiders and leaks for quite some time. In this particular instance, he received information, including video and images, of yet more US Navy encounters with (highly) unconventional objects.

We are talking about spherical objects and triangular (or pyramid-shaped) objects.

Here is what Jeremy had to say about this.

On May 1st 2020 a classified briefing was generated about the UFO / UAP presence, via the Office of Naval Intelligence (ONI). Those familiar with the briefing articulated to me that the goal was to de-stigmatize the UAP problem and to promote more intelligence collection regarding UAP incursions and encounters with active military deployments. This UAP briefing was a build-on to a previous ONI briefing, generated October 18th 2019. Both were distributed across a wide range of intelligence networking platforms (such as SIPRNet, JWICS and various Intelink systems).

I was able to obtain information regarding these and other UAP related briefings – as well as – two unclassified slides and some of the most intriguing military captured UAP footage I have ever seen.

So, he is saying that in the aftermath of the classified briefing that took place on May 1, 2020, he received information, including video, that he then needed to investigate, corroborate, and confirm. Corbell describes doing this in a kind of investigative partnership with journalist George Knapp. According to Jeremy, they did indeed confirm that this information was genuine.

Very significantly, we now get word from the Pentagon itself that, yes, the “pyramid” video is genuine.

What he learned essentially were three basic things. First, that the May 1, 2020 briefing was done in order to educate the attending personnel on UFO/UAP, to destigmatize the phenomenon, and to promote more intelligence collection. This briefing contained “numerous recent UAP cases with photo and video evidence.” He learned that the briefing contained roughly ten videos and perhaps a dozen photographs of these objects.

As he described it, Corbell was given data on three events. One concerned the USS Russell in July 2019 off the coast of San Diego. It is very important to understand that the USS Russell was one of the ships involved in the recently reported Channel Islands UFO event from July 2019 that we posted from The Drive’s department The War Zone. The original article is here, and our initial post is here. Jeremy doesn’t say so in his own article, but this event is clearly part of the series of events that the War Zone reported. As a reminder, in that article, a series of mysterious “drones” were reported as getting in very close to the USS Russell and several other ships in its group during exercises. So now we have a triangular or pyramid-shaped object thrown into the mix.

And indeed, in a video by George Knapp (Mystery Wire), he talks about this with Jeremy, and here the direct connection is made to the events of July 14 & 15, 2019. Furthermore, they point out that the ship logs of the Russell stated that the object hovering over them was a mere 700 feet above them. So this apparently is what they were talking about. And as Jeremy points out in the video below, that doesn’t look like any drone or aerial vehicle that we know of (of course, people have talked about the TR-3B Black Manta for years).

Here is the video of the object, taken from the USS Russell in July 2019. (For the moment, it seems most reasonable to ascribe this to the night of July 15, which was the night that the Russell reported a great amount of activity above the ship).

So this was not the only object over the Russell that night. It’s just the one that we can look at. Corbell writes in his article that “Observations of this encounter series were noted in detail” during the May 1, 2020 briefing.

Jeremy also learned of another series of events that was discussed during the May 1, 2020 briefing, this one concerning the USS Omaha. The information here does not appear yet to have independent confirmation. And in fact, unless I am missing something that is staring me in the face, I was not able to determine even where the Omaha was during its encounter. If someone has that info, please write it in a comment or on  the forum. In any case, Corbell received some images of what was seen over the Omaha. This is a spherical-appearing object that is suspected of being a “transmedium vehicle.” That is, capable of traversing through the air and under the water. The three images do appear to show the object entering the ocean. Corbell noted that a search was made for this object, including by a submarine, but it was never found. He writes that “Observations of this encounter series were noted in detail.” 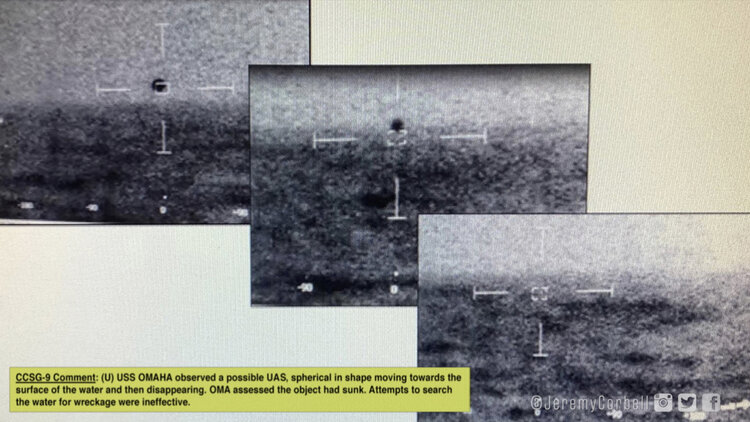 [These are the three photographs Corbell received, which he posted in his article linked above.]

Corbell also wrote that the May 1, 2020 briefing included a report on another event that was recently reported on, which was the March 4, 2019 photographs of the so-called “Acorn” UAP, the “Metal Blimp” UAP, and the “Sphere” UAP. We reported on those here on this site.

All in all, this is more drip coming out of the faucet.

I am currently in touch with someone who can shed some additional light on this and will report back as soon as I learn anything. And also if he is okay with me using his name.

While it’s possible this is a sophisticated “controlled” disclosure effort, it’s also possible that it’s a straightforward leak made by someone who simply believes in getting the information out. The history of UFO leaks has seen many examples of this, but it is possible that the leak was made by someone powerful who wanted this information out.  But I would emphasize that the important thing here is to determine whether or not the leaked information is true, and so far there are no reasons to doubt that.

The real question — again unasked — is “who could be behind these objects?” Who is flying those triangles (or pyramids)? Does anyone really believe it’s the Chinese or Russians? If not them, it seems to me we are talking about “us” or “them.” And still no one is raising this question.

43 thoughts on “Flying “Pyramids” Over US Navy Ships”