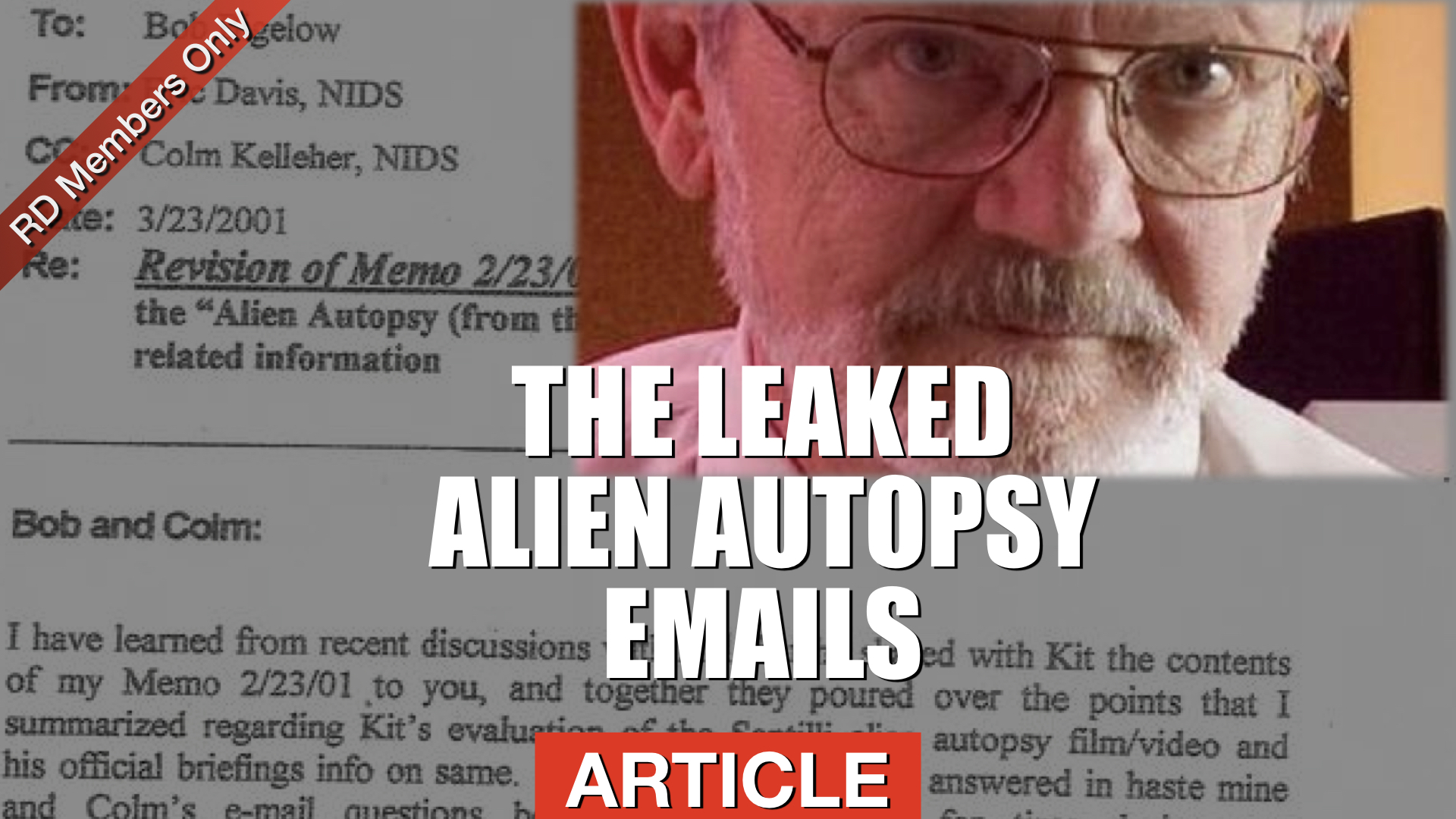 The UFO community keeps getting rocked by new information these days. Just recently, a series of leaked emails made it to the site Imgur. As of this writing, it’s had 845 views, so it’s fair to say the cat is out of the bag. Here is the link:

This is a series of emails from early 2001 primarily discussing Kit Green’s evaluation of the Santilli alien autopsy film (released in 1995 and shown on Fox TV in 1997). Although even by 2001 many commentators had already determined the film to be a hoax, Kit Green’s analysis said otherwise. 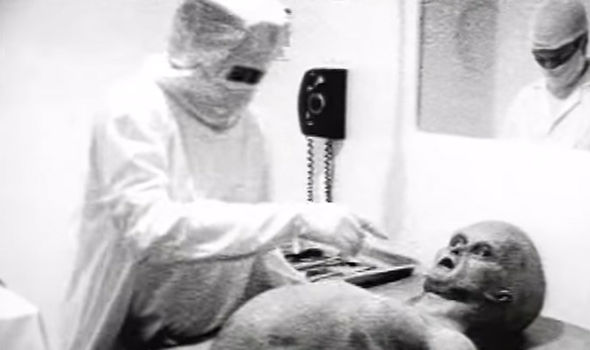 If you don’t know who Dr. Christopher “Kit” Green is, here is a decent page that can help. He is a scientist and former senior CIA intelligence officer with a longstanding connection to research into psi phenomena and UFOs. While at the CIA he was known as the “Keeper of the Weird.” He is a close friend to Dr. Hal Puthoff and, like Puthoff, probably knows as much about the UFO/ET situation as anyone out there.

This is an eleven-page leak, all emails dated from the early spring of 2001. The four participants were: Dr. Kit Green, Dr. Hal Puthoff, Dr. Eric Davis, and Dr. Colm Kelleher.

CC’d on the various emails were Robert Bigelow

John Alexander, Kristen B. Zimmerman, and an address noted only as “LNUSTC1.VZZ559@gmeds.com”.

These last two recipients are unknown to me. Other names are mentioned in the emails themselves, including Jacques Vallee at one point. This is clearly heavily connected to Bigelow, as Davis and Kelleher were both directly employed by Bigelow’s organization, the National Institute for Discovery Sciences (NIDS). Alexander, Puthoff, and Green also had strong connections to Bigelow, as most likely the other recipients in this small group.

Key points taken from these emails, which total 11 pages, is as follows.

Starting in the spring of 1999, Davis, Kelleher, Puthoff, and Green had many communications regarding the Roswell incident, alien bodies, the crash retrieval program, the Santilli film, and more.

During these communications, Green gave his opinion that the Santilli film was “real,” and that the cadaver depicted in it was not human.

The emails make it clear that Green received three different briefings on topics relevant to UFOs, Roswell, and alien bodies. These are described by Davis.

“Briefing #1: Official briefing at the Pentagon ca. 1981. While Kit was at the CIA, he was briefed on evidence that something (UFOs) was flying around, this evidence was in the form of collected intelligence data. (There was no discussion of alien crash retrieval hardware or bodies in this venue.) . . . .”

“Briefing #2: Unofficial briefing at the Pentagon ca. 1987/1988. After Kit left the CIA he was called into the Pentagon by a person in uniform. This person showed Kit the alien autopsy photos and reports, etc. The photos of the alien cadaver Kit saw were consistent with the cadaver seen in the 1995 Santilli film/video. Kit was asked to professionally evaluate the material provided to him at this particular briefing.”

“Briefing #3: Official briefing at CIA ca. 1991/92. While at General Motors, Kit was called into the CIA. The CIA people wanted his medical/forensic pathology expertise to examine and analyze some autopsy reports. The nature of these reports was left ambiguous during the briefing, but Kit was fully expecting them to be the alien autopsy reports he saw in Briefing #2. But then no action took place after this briefing occurred and Kit was left hanging.”

These were Kit Green’s three UFO/alien-related briefings. Two were described as official, one as unofficial.

Briefing #1 was an official briefing at the Pentagon and didn’t go farther than to mention that something like UFOs was real, based on “collected intelligence data,” whatever that might mean.

Briefing #2 was described as unofficial, and it’s the real bombshell. A full seven or eight years before the Santilli film appeared in 1995, Green was shown photos of an alien autopsy that was “consistent” with the being depicted in the Santilli film. Elsewhere in the email exchange, Green goes so far as to say it was the same being.

The description of Briefing #3 is not especially clear. We are not told what made this a UFO/alien-related briefing, although presumably something in this briefing must have made it clear to Kit Green.

Important note: I wrote earlier today to Kit Green about this. His reply in full was:

It was a hoax. This was almost 20 years ago. I learned about a decade ago who and why persons in the government lied to me.

You may quote me. I have zero additional comment.

To which I replied,

. . . it’s hard to understand how identical images were shown to you in 1987/88 as what appeared nearly a decade later.

. . . I am just pointing out that these are obvious issues with the information already presented.

You are absolutely right: the short answer is I do not know. The much, much longer explanation is so complex I have no time in my busy medical practice to explain. It would take several days I do not have.

Cliff notes version: there are liars in the government, too.

Thank you for this additional comment. This would strongly imply that Santilli wasn’t acting on his own in creating whatever it is he created. It would imply he had help from the Pentagon doing it, with planning going back a full decade. From what I could gather regarding the CIA briefing from 91/92, it might imply they too were complicit, although that’s more of a stretch given the lack of information on that briefing. Yet it might be so.

For the life of me, I have a hard time envisioning how and why that would have happened. Planning a UFO hoax for nearly a decade. Creating fake photos and fake autopsy reports good enough to deceive you — which could not have been easy in the least, and indeed a dangerous thing to attempt because they might easily be caught. Then (presumably) to give the film to Santilli. Since there is no way he is going to create out of whole cloth an exact replica of the alien body without intimate cooperation from the people who lied to you.
. . . it seems a heck of a strange way to pull off a hoax. A long-con that failed almost as soon as it was released. Makes no sense to me — of course, I am a complete intel outsider.

Kit’s final reply was that

The problem with the Santilli film is that there were many versions. [Santilli’s] angst was that when he realized that, he realized he had been used. I don’t think he was part of the later fraud; what I originally reviewed was a real autopsy, but it was one of the 17 progerics … several of which are very ‘humanoid’ looking through puberty.

He added that the scenario wasn’t all that complicated: a small group of government persons “seeking excuse for money” who used him for those purposes. And that the autopsy wasn’t of an alien, but one of “17 progerics,” that is, individuals with the disease progeria, which causes rapid premature aging.

I might add here that in my few communications over the years with Kit Green, I am not sure I have communicated with anyone who is as precise in his manner of communication, and few who are as formidable in their intellect. Kit Green isn’t just smart. He is very smart. It’s not hard to see why he gave science briefings to President Reagan.

His answers to my questions seem quite definitive. But I can’t help thinking that they leave several questions.

Green seems to be saying that his 1987/88 Pentagon briefing from a person in uniform was deliberately designed to fool him into thinking he was being shown photos of an alien autopsy and reports discussing the same. At this, we really have to stop and wonder. No one has seen these reports, and they surely would be interesting to read today. But Kit Green understands autopsy reports exceedingly well. Consider how hard it would be to fool him not only with photos but the report itself. I know that I couldn’t begin to do it. You would need someone every bit as knowledgable of medicine, biology, and hypothetical alien beings as Green is.

If it’s true that he was lied to, it would mean that Ray Santilli isn’t the primary author of his hoax, which is what we’ve been led to believe all these years. It would imply that the ground was being prepared many years earlier by the Pentagon, and possibly by the CIA (one way to interpret the 1991/92 briefing).

I know that we all realize that the military and intelligence community lie about things. But the magnitude of this would be significant. A decade-long preparation of an alien autopsy hoax by the Pentagon and CIA that is good enough to fool Kit Green but which quickly falls flat on its face once it is made public. Does this make any sense to you?

Beyond that, it would be well to ask why. The point of all this? Green implies money. I guess I don’t see how but okay, money by somehow creating a fake alien autopsy. Money would make sense if you only saw Santilli as the author of the hoax, although even the Wikipedia article on this repeat’s Santilli’s claim that he did see a genuine alien autopsy in the early 1990s and was trying to “restore” his film to match that.

But whatever Kit Green saw in 1987/88, and which was reinforced in 1991/92, was good enough, compelling enough, to make him believe. He was adamant that the Santilli alien was identical to what he saw in 1987/88.

Most of the rest of the email exchange discusses Green’s thoughts on the authenticity of various elements of what is depicted in the Santilli film. These are interesting and worth reading.

I keep wondering if something else is going on here. Perhaps the alien autopsy film is a fake, but not the fake we’ve been led to believe? Could it be a fake based on something true? And done with outside help?

Or – heresy – could it be real after all? Wouldn’t that be something.

After all, stories of alien autopsies were being discussed long before the Santilli film made its appearance in 1995.

I’m not offering a judgment one way or the other right now except to say that the scenario of the Pentagon lying to Kit Green in 1987/88 seems odd. I’m not saying it didn’t happen that way. I don’t know, but something smells wrong.

By the way, for those of you wondering if this leak constitutes the previously referred to “Big News,” the answer is … no! In my view, the Big News is significantly bigger than this.