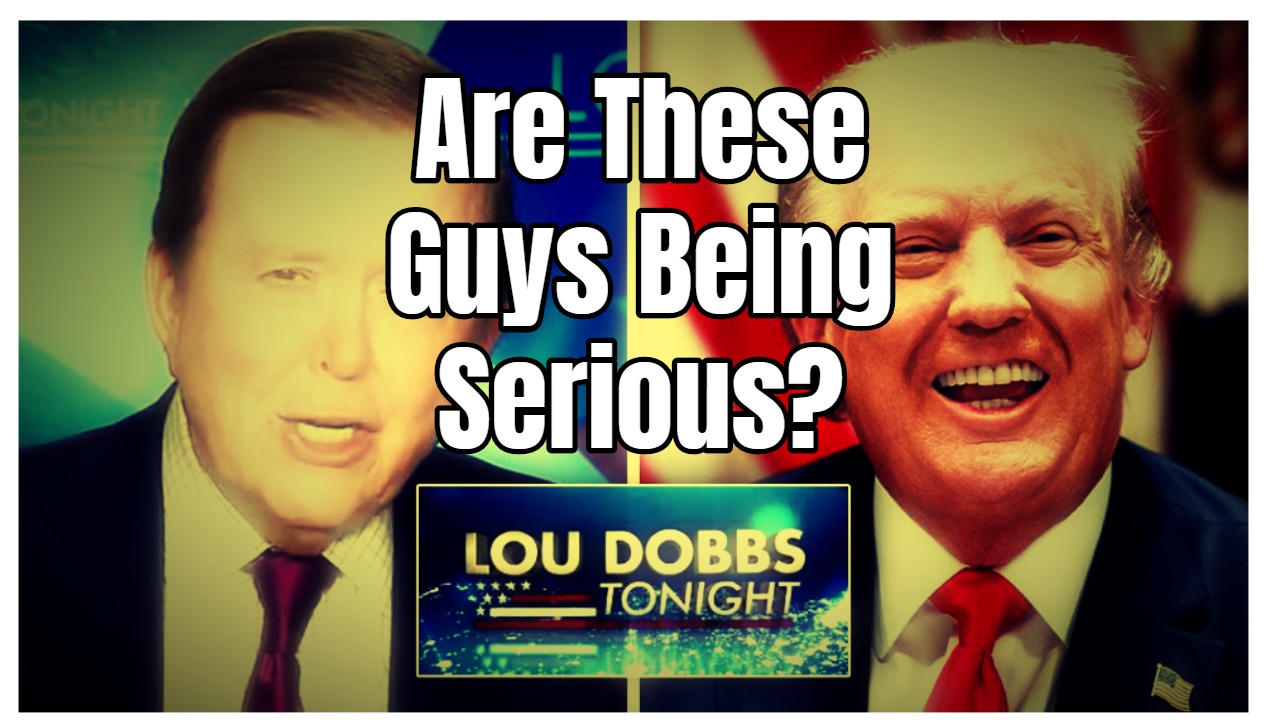 How amazing the world of UFOs has become. Now, President Trump has discussed the subject for the second time this summer. First, with his son Donald, Jr., the President called Roswell “very interesting,” and said “I won’t talk to you about what I know about it.” Don Jr. actually told his dad on camera that he wanted everything about Roswell declassified. All of us watching this were left wondering, what the heck did we just see?

And now Lou Dobbs follows up.

“A lot of my friends are very concerned about what the federal government is doing with regards to UFOs, so if I could just ask you… are you going to commit more resources to exploring UFOs and open the documents to the public?”

They both laughed at this point and Trump said something that I thought was pretty skillful, done in such a way that he didn’t overly commit himself one way or the other. But — and this is important — he did not dismiss UFOs. Not at all.

“Well I think you’re probably… in this country, you’re the UFO expert,” replied Trump. “So, I’m going to be guided by the great Lou Dobbs. And I will tell you that I’ll do whatever you ask me to do, including total transparency.”

That part was classic politician-speak, because it’s quite obvious no one considers Lou Dobbs a UFO expert. My take on that was simply that Trump was being Trump. But what he said next is something I do think was much more serious.

“I gotta tell you, there’s probably some pretty good transparency needed there. There’s no doubt about that.”

Whatever Trump really thinks about UFOs, it’s now clear that his son and one of his closest public supporters are genuinely into the subject. Can we have any doubt that there have been some good UFO conversations that the President has had privately with both of them?

Who knows whether this can lead to anything. In any other year, I would say not likely. But in 2020, it seems anything and everything is possible. But for Trump actually to move on this subject in a way that is meaningful, he’s got his work cut out for him.

Over a decade ago, I interviewed a retired senior U.S. Air Force officer who had recently completed a very impressive career, capped by extensive knowledge of the UFO and alien subject. This officer, who also had a Ph.D., told me that in around 2005 or so, he was able to meet a man who had handled alien bodies at Roswell. This had apparently caused the man health problems, but he nevertheless lived many years afterward. This man was now in a very secure hospital on his deathbed. An Air Force security officer accompanied the senior officer, who then attempted to extract relevant information from this dying man. The dying man was able to confirm the nature of the bodies found (EBE-1 type, which was more human-like than the EBE-2 type).

At some point this Air Force officer said that it was a shame that people on the inside were prevented by their security oaths from talking about the reality of extraterrestrials here on Earth. He offered the opinion that there should be a Presidential Executive Order that would liberate such individuals from their oaths. The sick man replied, “it would take a hell of a lot more than the President to release us from our oaths.”

That story always resonated with me. It was just one more piece of evidence to paint a picture of runaway secrecy, of privatized secrecy that in many ways has moved beyond the formal powers of the U.S. government.

Even so, one has to think that the power of an Executive Order would be a good start. But how would a President go about it? It’s got to be something better than “I hereby end UFO secrecy.” It would have to deal with the public and private elements of UFO secrecy, and would have to satisfy the military hawks who would be paranoid about giving up highly sensitive technologies that they have been developing with their allies in the private corporate world.

It would have to give protection to whistleblowers both public and private, who have genuine information about this subject. It would have to be done in connection with government experts who truly understand the inner workings of the Pentagon. Certainly you are dealing with a massive bureaucracy, and presumably you would want experts with strong knowledge of inside the National Reconnaissance Office (NRO), the National Security Agency (NSA), and definitely someone with excellent knowledge of the workings of the Pentagon’s Special Access Programs in the OSD’s OUSDAT, something recently highlighted in the Admiral Thomas Wilson notes. But you would need to crack more than the Pentagon. There is the CIA and the Department of Energy (DOE), with equally or even more secret connections to the UFO reality. The DOE in particular is suspected by many people to hold the deepest UFO secrets of all.

In other words, a Presidential Executive Order will very possibly be no more than a dead letter if it is not itself expertly crafted by the President’s best lawyers and government secrecy experts. I think we can assume there would be tremendous resistance from many quarters to any such move to unilaterally end UFO secrecy, so any moves by a President wanting to end secrecy really needs to be done perfectly. Better than perfectly.

On the other hand, it’s been a crazy year. And we are still three months away from the election. Can things get any crazier?

In all likelihood, I would be inclined to think that this last statement by President Trump goes nowhere. He is in a battle for re-election, and the guy ain’t too popular with more than half the country, to put it mildly. Maybe the polls are skewed again; that is entirely possible. Even so, he’s in a tough spot and you’d have to wonder if even he would be so rash as to play the UFO card at the last minute in an attempt to win over voters. But then again, this is a guy who has been totally unpredictable (and unmanageable) since he’s been in office.

What’s probably most lasting in all this is how Dobbs just threw it out there. Yes, he laughed as he brought up the topic, but that’s simply the result of a lifetime of ridicule making him uneasy at broaching it. You could tell he was quite serious. And it’s clear by now that Donald Trump does indeed appear to take at least some of the UFO phenomenon seriously. Operative word: appear. He hasn’t made a definitive statement on the subject. But we now know his son and one of his strongest public supporters are both strongly engaged in the subject of UFOs.

By the way, most mainstream U.S. journalism has covered this, at least briefly. Sometimes they get a bit snarky, like Newsweek with the headline “Trump Says He Will Do Anything ‘UFO Expert’ Fox Business Host Asks.” As if Trump seriously thinks Dobbs is a UFO Expert. The article then went out of its way to discredit Dobbs before even raising the ET/UFO issue with this:

Dobbs invoked a popular right-wing conspiracy theory by praising Trump for being “transparent” despite the efforts of a supposed “deep state” working against him before asking him about whether he would release new information about UFOs.

Sure, the whole deep state thing is just one big right-wing conspiracy theory. Sigh. You know, it wasn’t long ago that the liberals were the ones talking about the deep state. I know this for a fact because I was one of them.

Anyway, it’s rather astonishing to realize that, after a very slow start, Donald Trump is starting to become one of the more “UFO-friendly” Presidents in recent history. He still has a way to go before surpassing Jimmy Carter in that regard, who’s promotion of a strong Freedom of Information Act did more for UFO transparency than any other President in modern history.

Even so, this is just one more thing to keep an eye on as we approach the apocalypse.

52 thoughts on “Are These Guys Being Serious?”