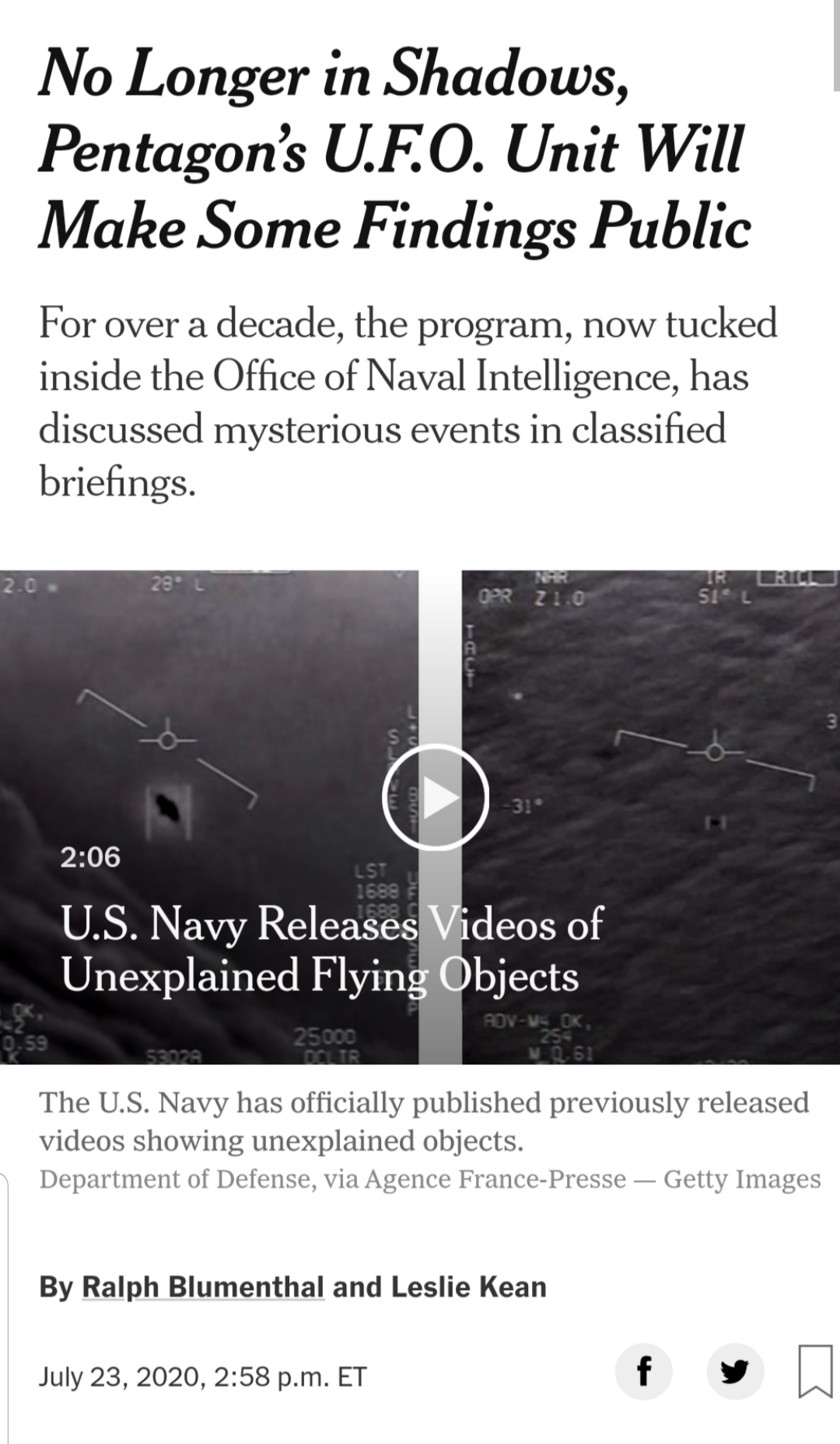 The New York Times published another article on the UFO subject yesterday. Any time the most prominent voice for the establishment speaks about this subject, it’s important. Already there has been a noticeable ripple effect going on in the major media, generally serious in tone and adding more fuel to the fire that this phenomenon is real.

Not only that, but this last article, once again by Leslie Kean and Ralph Blumenthal, moves the discussion toward the retrieval of UFOs and artifacts by elements of the U.S. government. What was mentioned in the article doesn’t amount to anything like proof of UFO crash retrievals, but several quotes are definitely noteworthy. Statements by Eric Davis, Harry Reid, and Lue Elizondo are all worth reading — particularly Davis, who hadn’t previously been brought into the wider UFO conversation by the establishment media.

Even so, the disappointment in the article was palpable. Part of it was due to the large buildup about this. For quite some time, we all knew that Leslie Kean and Ralph Blumenthal were writing a new UFO piece for the New York Times. Many of us tried to help them out by not reporting on this overly much, but the problem was that the whole thing was outed when attorney Michael Hall surreptitiously livestreamed his conversation with Blumenthal at a time when Blumenthal was asking him about the Thomas R. Wilson notes by Eric Davis. Once Blumenthal realized they were being streamed, he demanded the video be cut.  But naturally, the word got out. Like most people, I never saw the video (very few did, I understand) but this is clearly what happened. So we all knew quite some time ago that something potentially explosive was being investigated by them.

Then we started hearing other rumors, that the investigation had moved more generally toward UFO crash retrievals. Well, that surely would be interesting, even if they didn’t cover the Thomas Wilson notes. One source on this matter said the upcoming revelations on crash retrievals would be “substantial.”

The rest of the world was oblivious to all this, of course, but there was a genuine crescendo of anticipation within the community of people who follow the UFO subject.

Then came the article. Right away, the headline itself was a letdown. “No Longer in Shadows, Pentagon’s U.F.O. Unit Will Make Some Findings Public.” Did the editorial team even realize that, for all practical purposes, they had been scooped a full month earlier by Danny Silva (who, by the way, is a new member of our site)? The news is important, especially if the Rubio-sponsored Senate Intelligence Bill becomes law (the Senate just passed it yesterday, so it’s moving along).

Now, there was some new emphasis on the fact that, if passed, this bill would require the “Unidentified Aerial Phenomenon Task Force” to report on UAP/UFO activity, and this would include at least some information for the general public. But honestly, we already knew this.

The statements in the article about crash retrievals are more significant, although even here they are not nearly as powerful as they could have been. For example, the article states that Lue Elizondo is “convinced that objects of undetermined origin have crashed on earth with materials retrieved for study.”

That’s great, and I don’t doubt that Elizondo is right, but the word convinced doesn’t carry much power. I’m going to take an educated guess that Elizondo has more to offer than his mere conviction. At the very least, one thinks the article could at least have given the reader reasons why Elizondo holds this conviction. But that doesn’t happen.

The article contains a few statements by former Senator Harry Reid which are interesting but also focus on what he thinks rather than what he knows. For instance, Reid “believed that crashes of objects of unknown origin may have occurred.” He is quoted as stating he “came to the conclusion that there were reports — some were substantive, some not so substantive — that there were actual materials that the government and the private sector had in their possession.” Presumably of non-earth-based objects and technology.

Now, everyone needs to remind themselves that people like Reid and Elizondo have got to be extremely careful with how they make these types of statements. Everything has to be exact, and everything requires the potential to being walked back if need be. This is clearly the case with Reid’s ultra-carefully worded statement.

Indeed, the Times had to issue a correction regarding Reid:

An earlier version of this article inaccurately rendered remarks attributed to Harry Reid, the retired Senate majority leader from Nevada. Mr. Reid said he believed that crashes of objects of unknown origin may have occurred and that retrieved materials should be studied; he did not say that crashes had occurred and that retrieved materials had been studied secretly for decades.

We are still in the era when, if you are a major public figure, you have to be very, very careful with how you parse your words, and how you are quoted.

So all this is interesting if not conclusive. Even so (and true to form for the Times), the article throws a great deal of cold water over anything genuinely extraordinary about UFOs. For instance this statement:

No crash artifacts have been publicly produced for independent verification. Some retrieved objects, such as unusual metallic fragments, were later identified from laboratory studies as man-made.

Okay, thanks for that, New York Times. However, things become more interesting when the article gets to Dr. (not Mr) Eric Davis. Here we have something truly new for public consumption. I will quote the four paragraphs in the article that are germaine to Davis.

Eric W. Davis, an astrophysicist who worked as a subcontractor and then a consultant for the Pentagon U.F.O. program since 2007, said that, in some cases, examination of the materials had so far failed to determine their source and led him to conclude, “We couldn’t make it ourselves.”

The constraints on discussing classified programs — and the ambiguity of information cited in unclassified slides from the briefings — have put officials who have studied U.F.O.s in the position of stating their views without presenting any hard evidence.

Mr. Davis, who now works for Aerospace Corporation, a defense contractor, said he gave a classified briefing to a Defense Department agency as recently as March about retrievals from “off-world vehicles not made on this earth.”

Now this is important, and offers the potential to generate forward momentum. Here we have Davis discussing materials that he presumably has studied that forced him to conclude “we couldn’t make it ourselves.”  And we have the equally provocative information that he gave classified briefings on “off-world vehicles not made on this earth” to an unnamed Defense Department agency, to the Senate Armed Services Committee, and to staff members of the Senate Intelligence Committee. All within the last year.

Of course, you have to expect skeptics on Twitter and beyond to smear Davis. What else can they do?

So yes, there is good information in this piece. It even ended on with a decent quote from Senator Reid:

“It is extremely important that information about the discovery of physical materials or retrieved craft come out.”

But despite the positive information provided in this article, the marked decline of the New York Times, which has been on spectacular display for several years, is also evident here. In this case, mainly through what has to have been heavy-handed editorial control by its senior management.

I don’t say this based upon any alleged inside information I may have. Yes, I do have information gained from a variety of sources, but this conclusion is based on my own analysis and judgment.

It seems evident that the senior editorial team at the New York Times severely limited and even sanitized what was contained in this article.

I don’t know Ralph Blumenthal other than through a brief and friendly email exchange. But I do know Leslie Kean and respect her very much as a journalist. I know she is dedicated to doing good work on the subject of UFOs. And I do know of a number of instances of overbearing editorial control evinced by New York Times senior management. Operation Mockingbird may officially refer to the cold war era of CIA-influenced media control (of which the New York Times was an integral part), but that model has never gone away. It has morphed and is stronger than ever, and the New York Times continues to be a key player in that system.

Do we think that UFOs are immune from the need for heavy-handed editorial control? Especially for a newspaper that, for seventy years, had consistently been ridiculed and debunked the subject?

Of course, this began to change in 2017, due to the efforts of several people who worked hard behind the scenes to make it happen. Not just Kean, Blumenthal, and Helene Cooper (who contributed to their article in 2017), but also Christopher Mellon, who was obviously instrumental in getting the major media to consider this story. Getting this story to the public was and remains very hard work.

I tip my cap to all the people who have made these articles appear in the New York Times. But it is clear that the Times senior management has thrown multiple obstacles in their path, much to the detriment of the outcome.

As to whether or not more will emerge, no one really knows. There was a potential hint in one of Blumenthal’s comments below the article itself (yes, he patiently and politely answered a ton of questions from readers). To one reader named Richie Farrell from Dublin, who expressed a bit of disappointment over the contents, Blumenthal replied: “Not everything can be reported all at once.”

Whether or not this is a hint of something more or not, only time will tell. Or, perhaps Leslie and Ralph can ditch the New York Times and find another home that will be willing to publish their genuine work. The Gray Lady ain’t what she used to be.

45 thoughts on “Were They Muzzled?”

Richard’s show started on KGRA back in 2012, and they still carry him. These are usually replays of Richard’s previous shows, many of them recent.  Join Richard as he discusses everything related to UFOs, global… Read More »
Feb
20
Mon
2023
8:00 pm The Richard Dolan Show
The Richard Dolan Show
Feb 20 @ 8:00 pm – 9:00 pm