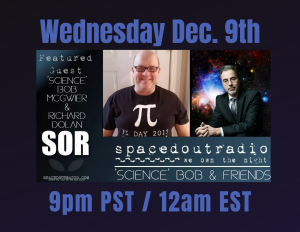 Tune into Spaced Out Radio TONIGHT, Wednesday, December 9th at 9pm PST / MIDNIGHT EST when our own lead RD Forum moderator, Bob McGwier will interview our own Richard Dolan on “Science Bob & Friends”.

Science Bob & Friends
The second Wednesday of every month, we bring in our resident Spaced Out Radio scientist, Bob McGwier to discuss the scientific side of the supernatural and paranormal. Each month, ‘Science Bob’ will bring a guest with a scientific or research background to talk about the practical and scientific side to the high strangeness that surrounds us. ‘Science Bob’ has specialized his work in the field of Artificial Intelligence and has been leading the way using computer technology to help detect UFOs/UAPs in the skies over the United States. He received his BSEE Electrical Engineering and BS Applied Math from Auburn University, and his PhD in Applied Mathematics from Brown University.

Dr. McGwier also worked at Sandia National Labs in Albuquerque starting in 1977 and was faculty Auburn University 1984-1986, Institute for Defense Analyses, Center for Communications Research from 1986-2011. Most recently, Science Bob retired as a faculty member of Virginia Tech where he worked since 2011 as Professor and Chief Scientist of the Ted and Karyn Hume Center for National Security and Technology.