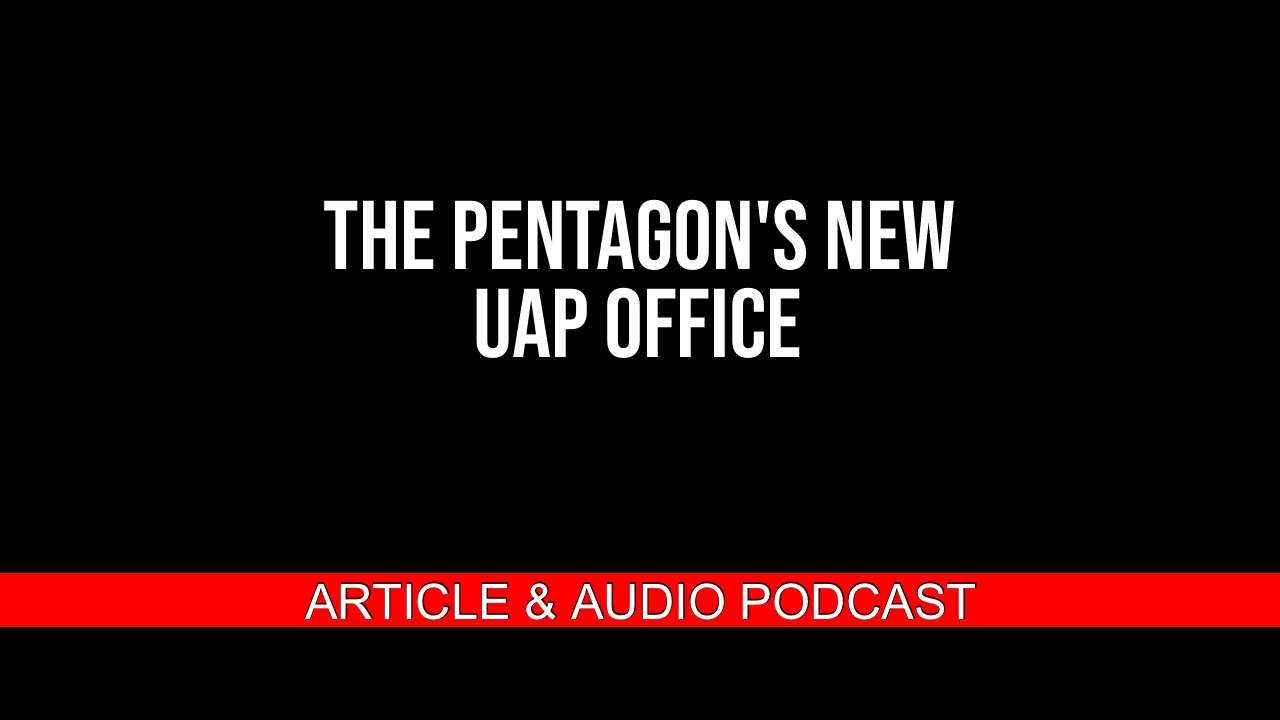 I am back from spending much needed time with Tracey and really wanted to get into a current UFO news item that has made the rounds for nearly a month now. That has to do with the announcement of the so-called “Airborne Object Identification and Management Synchronization Group (AOIMSG).” Of all the awful military department names out there, that has got to be a contender for one of the worst.

Below is a brief piece I prepared, although my audio podcast is longer and has more off-the-cuff thoughts.

Last month, on November 23 to be exact, the Pentagon announced the creation of a new organization supposedly designed to deal with the potential of a threat from UAP (UFOs) in restricted airspace.

Many people in the UFO field thought this was a great thing. After all, isn’t that what we’ve wanted? For the Pentagon to acknowledge the reality of UFOs and give some level of Disclosure?

Well, that’s not exactly what happened. In fact, far from it.

So this new department was created to replace the U.S. Navy’s UAP Task Force, which of course was the organization that released the UAP report last June, basically a highly anticipated event that it’s fair to say fizzled out with not a whole lot of information.

So now we apparently have this new group, which the Pentagon gave the absolutely terrible name of the Airborne Object Identification and Management Synchronization Group (AOIMSG). Good lord.

Here is a link to the memorandum so you can read it in full.

Here is how the memorandum describes the task of this new group.

“The AOIMSG will synchronize efforts across the Department and the broader U.S. government to detect, identify and attribute objects of interests in Special Use Airspace (SUA), and to assess and mitigate any associated threats to safety of flight and national security.”

Providing oversight of this group is the Under Secretary of Defense for Intelligence and Security. This is not the best outcome for anyone interested in clarity and transparency from the government.

The USDI&S, as it’s known, is directed to “lead an Airborne Object Identification and Management Executive Council (AOIMEXEC) to be comprised of DoD and Intelligence Community membership…”

As far as I can see in this memo, there is no clear public reporting mechanism in this memorandum. That’s a problem.

Lue Elizondo tweeted about the many problems of having this organization being managed by USDI. For one, he wrote, this is exactly the organization that has “underplayed and tried to kill the UAP effort for years.” Moreover, there is no reporting mandate in this document, so no definite way for any unclassified findings to be reported to Congress or anywhere else. In Elizondo’s assessment, giving the Pentagon oversight over this subject, considering that there are still powerful elements there which actively underplay the importance of this subject, “this is akin to giving an alcoholic the key and control to the liquor cabinet,” he tweeted. “If you want to maintain UAP/UFO secrecy, this is exactly how to do it.”

What this looks like at this point is that the Pentagon is doing what it does so well, and has done successfully in the past. That is, to take the initiative on the UFO subject and make sure that they and they alone have control over the UFO/UAP narrative. This was done multiple times during the 1950s and 1960s and beyond. Indeed, they did a great job on this during the 1990s when the Roswell subject threatened to become too much of a problem and the Pentagon wisely took the initiative to block the Congressional investigation and release its own report that gave us the infamous Mogul Balloon theory as well as the crash test dummies as the explanation for Roswell. The Pentagon knows very well how to maintain the initiative on the UFO subject.

Indeed, the memo states that effective immediately the new organization will be taking over all duties from the Navy’s UAP Task Force.

There is a good reason why things went down this way. In the current version of the National Defense Authorization Act (NDAA), given to us every year since 2004 thanks to 9/11, there is an interesting amendment in there, sponsored by Democratic Senator Kirsten Gillibrand.

A good link to the amendment is at the Black Vault.

The Gillibrand Amendment, as it’s known, calls for the creation of something similar to the AOIMSG and AOIMEXEC, but more of the kind that the public would be much more likely to get excited about. For one thing, this amendment requires any such organization actually to conduct serious investigations on UAP incursions and report its findings to Congress. And not just over sensitive US airspace but over civilian locations and definitely nuclear installations. The Gillibrand amendment even has a better name for this organization, the Anomaly Surveillance and Resolution Office (ARSO) – we could at least live with that. It would be responsible for developing standards and procedures to collect, report, and analyze any UFO incidents. It even spells out the need to study “adverse physiological effects” of Ufos. It would be required to have sufficient personnel to do field investigations, it would be required to have relevant training, equipment, basically any resources that would be needed to quickly respond to any of these incidents.

Not only that. ARSO would be required to conduct real science to test any theories to account for these incidents. In other words, it would be asked to develop theories and hypotheses for these UAP. The language in the amendment talks about considering things like propulsion technology, aerodynamic control, power generation, and much more.

Suffice to say, the Pentagon’s new office doesn’t seem to have anything like this. Not even close. Now, the amendment is in process now and this hasn’t been approved, so I suppose we will see what happens.

But it definitely looks like the Pentagon is still doing everything possible to keep this matter at a low level for as long as possible.

The old UAP Task Force already had enough problems to deal with. Clearly it was poorly funded, was given basically no time to do anything like a real investigation, and was not empowered to do anything like a genuine investigation of UAP/UFOs. That seems obvious. Was this the point all along? And now the whole operation seems to be taken over by the Pentagon in an attempt to keep this issue hidden from us for the foreseeable future.

The Gillibrand amendment, if it goes through, certainly would promise to have a better outcome in terms of the things that the public cares about. Whether or not it will make its way into the final version of the NDAA is another matter, and if so, whether it will overturn the Pentagon’s new office or compete with it is another matter entirely.