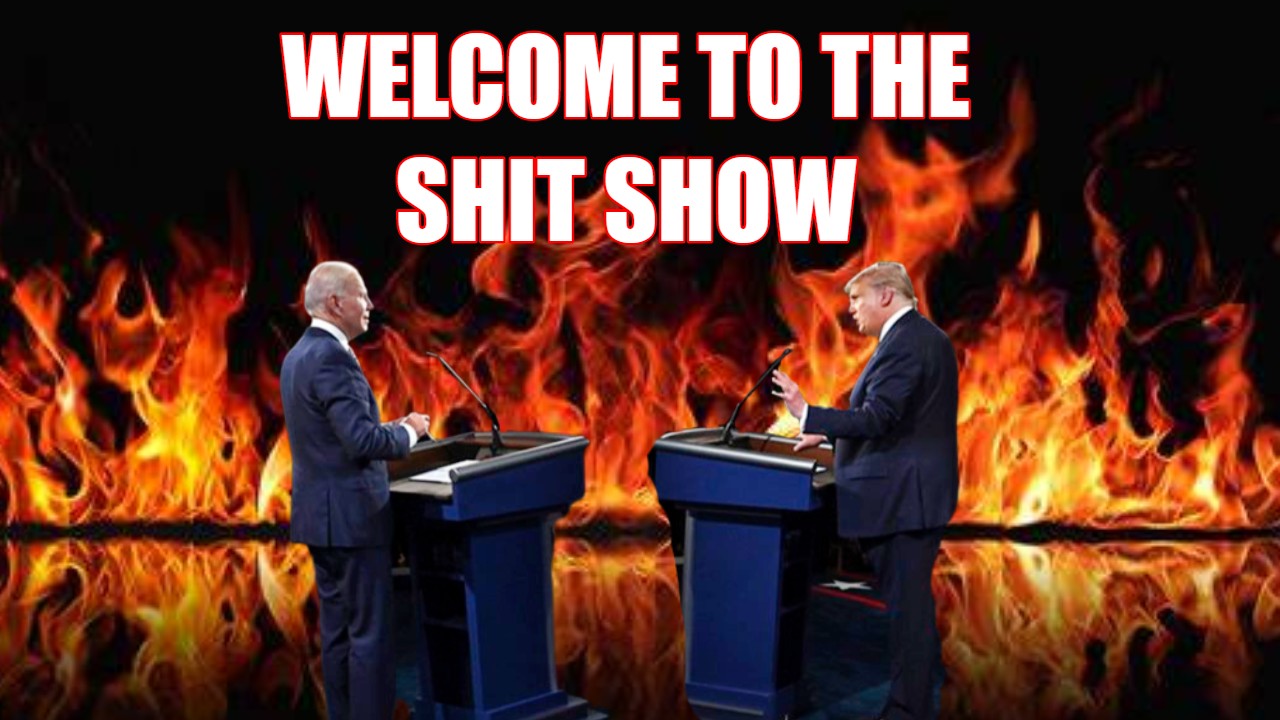 [RD Note: part of me didn’t want to post commentary on the debate, simply because I don’t want to get everyone here fighting with each other. But the debate was too noteworthy to leave alone, so I decided to go for it. Even so, I will ask all commentators to try their best at not triggering hostility from those on the other side of the argument. We can do this!]

Last night I got my popcorn, turned on the TV, and joined the millions who watched the Presidential debate. Right out of the gate, it seemed all of the viewers experienced the same telepathic message: shitshow.

Maybe this is what the end of the American empire looks like. A total, complete inability of the two candidates for the highest elected office of the world’s most powerful nation to provide a coherent discussion on the important issues affecting our world. Instead, they produced an unlistenable, unendurable cacophony.

I am sure I wasn’t alone in expecting Joe Biden to melt down at one point or another. And it’s possible he would have, or even did, but it was obviously hidden by Donald Trump’s constant over-the-top interruptions.

It’s clear what Trump’s strategy was: badger Biden to the point where he would lose his composure and say something stupid. But Biden kept it together just enough to avoid the worst outcomes for himself. Trump’s strategy only made him look like a bully. Throughout Trump’s Presidency, I have generally tried to avoid critiquing his behavior as a major issue, and have tried focusing on policy. But in the real world, optics matter, behavior and norms matter, and Trump didn’t help himself last night.

Napoleon once said, ‘Never interfere with an enemy while he’s in the process of destroying himself.’ Instead of following that advice, Trump acted like a petulant preteen. Shockingly, Biden followed it substantially better (although I am guessing some of Biden’s supporters are less shocked than I was).

Biden didn’t win the debate. Trump simply threw it away. It was his to lose, and he lost it. I realize that each candidate has supporters who reflexively will see their guy as the winner. But at this stage of the campaign, the point is to win over undecided voters, to reach out to those remaining few centrists who are still unsure of who will get their vote. For that, you need at least some tone of civility, respectability, and moderation. Sure, politicians fake those qualities every day, but that’s the game and you have to know how to play it. And if you refuse to play it, you must at least focus on substantive issues.

That’s what Trump did in 2016. Despite his vulgarity back then, he focused on many genuine issues when he ran against Hillary Clinton. It might be easy to forget this in 2020, and especially after last night, but four years ago Trump raised concerns that—agree with him or not—landed with many American voters. Trade, China, the Forever Wars, globalization’s destruction of the middle class and working class, the opioid crisis, corruption in Washington, untrammeled illegal immigration, the economy. All of these were matters that Trump was able to raise effectively, which is why he got elected.

This time? Not so much. In fairness, there were a few. It might have been easy to miss amid the ninety minutes of verbal carnage that took place, but there were a couple of real issues that Trump handled last night that didn’t totally flop—again, whether one agrees with him or not—such as the Supreme Court, “law and order,” and even the matter of reopening the economy. But he undermined himself constantly by not allowing Biden to get a word in and bury himself, which I thought could have been done so easily.

Biden for his part looked old. Really old. And I saw nothing of substance in his performance. I found his contradictory critique of Trump on Covid to be especially annoying: on the one hand blaming him for 200,000 deaths, and on the other hand for tanking the economy. Especially when he himself argued against reopening the economy. I mean, pick a side, man! I found that not just unfair, but incomprehensible. But that’s politics.

But it was Trump who really blew it. Whatever one thinks about whether “white supremacy” is actually the scourge that it has been portrayed as being for so long, Trump had a golden opportunity to reject it and at least to try to put that issue to bed. How hard would it have been to say, “I reject the notion of white supremacy, just as I reject all notions of racial supremacy.” Most of us could have done that in our sleep. He could still have continued to attack Antifa and BLM, but he had a chance to help dial down the national craziness just a notch, and all he did was to help dial it up further.

I’m also one of those people who thinks that the Hunter Biden Burisma scandal is genuine. I’ve followed it since the Obama years. It’s a real thing. All Trump had to do was let Joe Biden respond without interruption and wait to hear what came out of his mouth. The allegation of corruption is not “discredited,” as Biden said. Sure, Biden’s party base has never taken any of that seriously, but I guarantee you that many independent voters wanted to hear Biden deal with this, and Trump just talked over his reply. Now the moment is gone. There’s little chance Trump will succeed in bringing this one up again. He was his own worst enemy.

I also got tired of the “far left” refrain Trump kept up against Biden. Yes, Biden has quite a few ultra-woke staffers on his team, and there is no question they will try to move his needle to the Left on all of the social-cultural issues. But Biden himself is definitely not a far left candidate; just ask any Progressive about that. He is as corporate and establishment a candidate as one could imagine. Trump really needed a different line of attack because I doubt that most people are going to buy the proposition that a 47-year Washington insider is actually “far left.” .

Again, not to say that Biden impressed. He clearly did not. For example, one area where Trump landed a blow was when he got Biden to disavow the Green New Deal and basically every shred of the Bernie Wing of the Democratic Party—as if that wing ever really existed in the party, anyway. Biden showed himself to be establishment all the way. Stating that “I am the Democratic Party,” was also not a shining moment for him.

Even so, Biden did some smart things up there. Something as simple as looking at the camera helped him. And overall, the fact that he tried to maintain his composure surely put him in a sympathetic light with most viewers, and it even made the several times in which he lost his composure understandable to those who are still undecided. And he landed the major meme of the night with, “Will you shut up, man?”

Trump is down enough in the polls that he ought to be worried. Yes, he was down in 2016 and ended up winning. But he and his party cannot afford that complacency this time around. He needs to win over independent voters who are sitting on the fence, and I see no way that he could possibly have won over any fence sitters with his behavior.

Still, even now, nothing remains certain. Despite Biden’s current lead in the polls, the election still could go either way. But Trump, wow. In the past, he showed himself to be a good debater when he needed to be, but last night was an act of self-immolation.

No question that the format of this debate was absolutely terrible. In retrospect, it’s easy to see how this result was inevitable, given the free-form style that it was. What an embarrassment.

This debate amplified the exhaustion that everyone in the country and world is feeling about the American political process. One of the big reactions in the aftermath of this spectacle is that many people are thinking that further debates are pointless and indeed that Presidential debates in general may be an outmoded idea. That’s a terrible outcome, and is further evidence of the erosion of the belief in a democratic process.

Oh yes, and what didn’t get discussed? Pretty much everything of importance. The ongoing theft of trillions of dollars from Main Street to Wall Street, how best can we actually re-open the economy now that so many retailers are dead in the water, how to deal with an ever-expanding list of hotspots in the world that could serve as the start of a major war, how to protect privacy in an age of universal surveillance … for starters. Even the substantive issues they supposedly dealt with left us with practically nothing to work with.

As all the pundits have commented, the real losers were the American people, and the rest of the world for that matter. The winners are the oligarchs who sit on top of the system. If Trump loses, his opponents will rejoice. The crude, vulgar, misogynist, racist, self-absorbed narcissist will be gone. In his place will be the ultimate establishment tool, a shell of a man who will serve as the vehicle for God knows what reprehensible neolib and neocon policies that will issue out of Washington. The desire to return to “normal” may be the thing that gets Biden elected. But I think it’s a sure bet that the days of normal are long gone. Goodbye to the old boss, hello to the new boss.

59 thoughts on “The Debate”