In honor of The Great Presidential Debate, which is tonight, I thought I would take an increasingly well-known test to see how my own political orientation lines up with how I see myself, and how I stack up against other people.

It occurs to me that many views and conclusions that I have held over the years have moved this way and that, and the truth is that I really haven’t been able to characterize myself for quite a while. In the old days, I was pretty much a Democrat-sympathizer, and usually rooted for Democratic political candidates over Republican. As many of you have gathered, however, I have been an orphan of the Left for the past decade or so. And I am sure most of you realize I have no use for either of America’s main political parties.

Anyway, I digress. So I took a test called the Political Compass Test, which you might enjoy taking as well. Why not? It was surprisingly challenging and, even more surprisingly, it asks many relevant and up-to-date questions. I think it’s rather well put together.

The test measures your political orientation along two axes. One is the standard Left-Right metric, but the other is Libertarian vs. Authoritarian. As we all know, there are different Leftists and Rightists, and it helps to get some clarity on the matter when you look at a bigger picture, which this tries to do.

My result? The main result did not surprise me — I am very close to being the ultimate Centrist. But not exactly. I lean SLIGHTLY to the Libertarian side and SLIGHTLY to the Left. I was actually surprised by these results. I would have thought I was more Libertarian than the test says. Apparently I have more of Mussolini in me than I would like to have admitted! 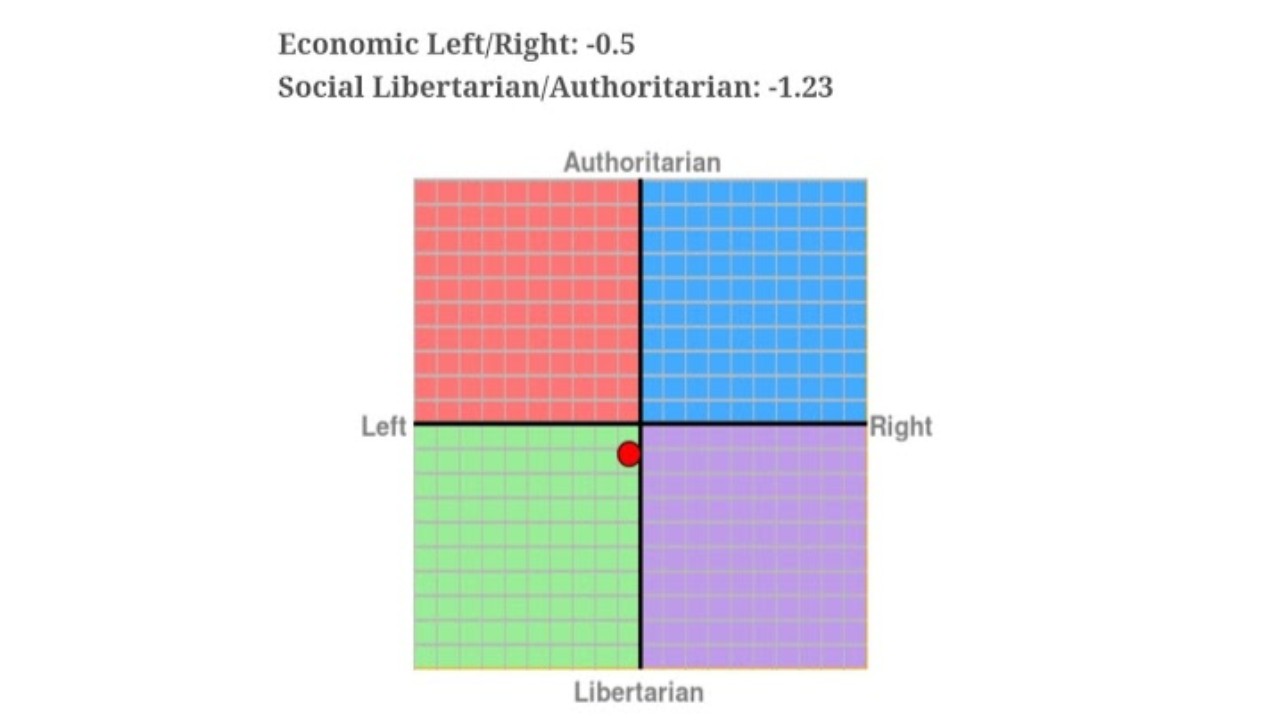 And I was also surprised that I tracked slightly to the Left. It’s not by much, as you can see in the graphic. Just barely. But I honestly would have thought by now that I would have been slightly to the Right. After all, I can see as well as anyone that I am swiftly moving into the “GET OFF MY LAWN!” phase of life.

But when I think about it, I am happy with the results, and hopefully you are, too, since you will now know that I honestly do try to be balanced when I provide any of the political commentary that makes it to this site, courtesy of my fevered brain!

Member Gregory Phillips linked another test, which I also took and gave similar results, although the economic component moved me to the Right a bit. Overall, some of the questions seemed a bit more loaded to me and a bit tougher for me since many of these issues were complex to my mind, not easily answerable one way all the time. So I often went “neutral” on quite a few of them. But of course, I guess that is the point of the test! My results came out very similar to the other test. Apparently, I am a Centrist — something I would never have thought about myself in the past. Thanks, Greg!

Here is a screenshot of my results: 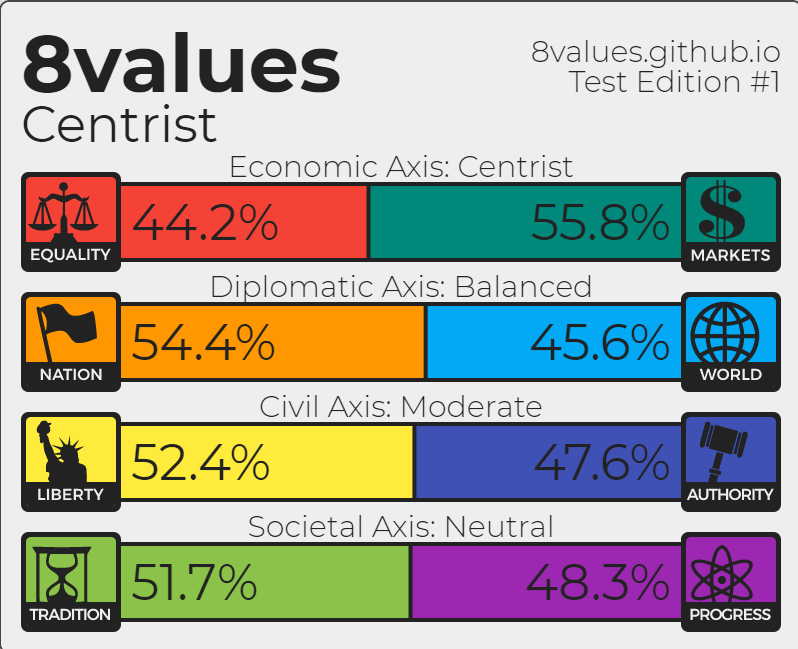 PresstoDigitate also had another survey here.  And yes I took it. Here, I am not quite a centrist but a Liberal-leaning Libertarian. I think mainly because I support social security and …. uh … universal healthcare? 🙂 For the record, my attitude on healthcare is that we Americans have the worst possible system. I would sooner have NO regulation and NO insurance (at least not in significant amounts) on healthcare (just as I support the same concept for higher education) because I believe the insurance is the single biggest cause of the ballooning costs. I think we would be infinitely better off with less intrusion by government in these matters. However, knowing that will NEVER happen, I support the next best outcome (in my view) which would be universal health care. Hell, talk to almost any Canuck and they will tell you the same. In the long term, I support the freedom of genuine markets and supply/demand to give us the best overall outcomes, but only without the red tape. In lieu of that, I don’t see why the Americans can’t do what other western nations do. As Kent Brockman says, “That’s my two cents!” 🙂 Oh, regarding the student loan situation, I think we seriously need to consider ending the student loan industry ASAP. It needs to die, and that wasn’t a question on the survey, unfortunately. 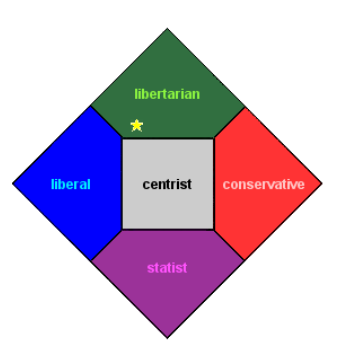 55 thoughts on “My Political Compass Results”