The Citizens Hearing on Disclosure was organized in 2013 by activist Stephen Bassett. Held at the National Press Club in Washington, D.C., it convened for the entire week of April 29 to May 3, during which 42 of the world’s leading UFO witnesses and researchers presented testimony to six retired members of the United States Congress and Senate. While there have been other efforts to bring information about the UFO phenomenon to the world, none have ever been attempted on this scale. As Bassett himself put it, the effort here was “to do what the Congress has failed to do … seek out the facts surrounding the most important issue of this or any other time – evidence pointing toward an extraterrestrial presence engaging the human race.”

This week-long endeavor has left a powerful ripple effect which continues to this day. The testimony provided by the participants measurably changed the perspective of every one of the panel members, several of whom expressed deep dismay over the extent and gravity of both the phenomenon itself and the cover-up associated with it.

I played an active role in the Citizens Hearing, providing six formal statements, five of which were delivered before the full panel. I think it’s a good idea to provide the text to each of these presentations to this site. I am also in the process of negotiating a way to make each of the videos available, as well. When I do, they will be attached to each of these posts.

My personal goal during the hearings was to use each of my statements to help walk these retired members of Congress through the difficult subject of UFOs; no matter what any other participant said during that week, I wanted my statements to be an essential education to the subject. For that reason, I believe they are best experienced in order.

What follows was my first statement. It was, in fact, the very first testimony offered for the proceedings, leading off at 9 a.m. on Monday, April 29, 2013. For those who are interested, I adapted much of this statement from my first book, UFOs and the National Security State (V1), especially the Introduction. I thought it would be a good way to kick off the week. 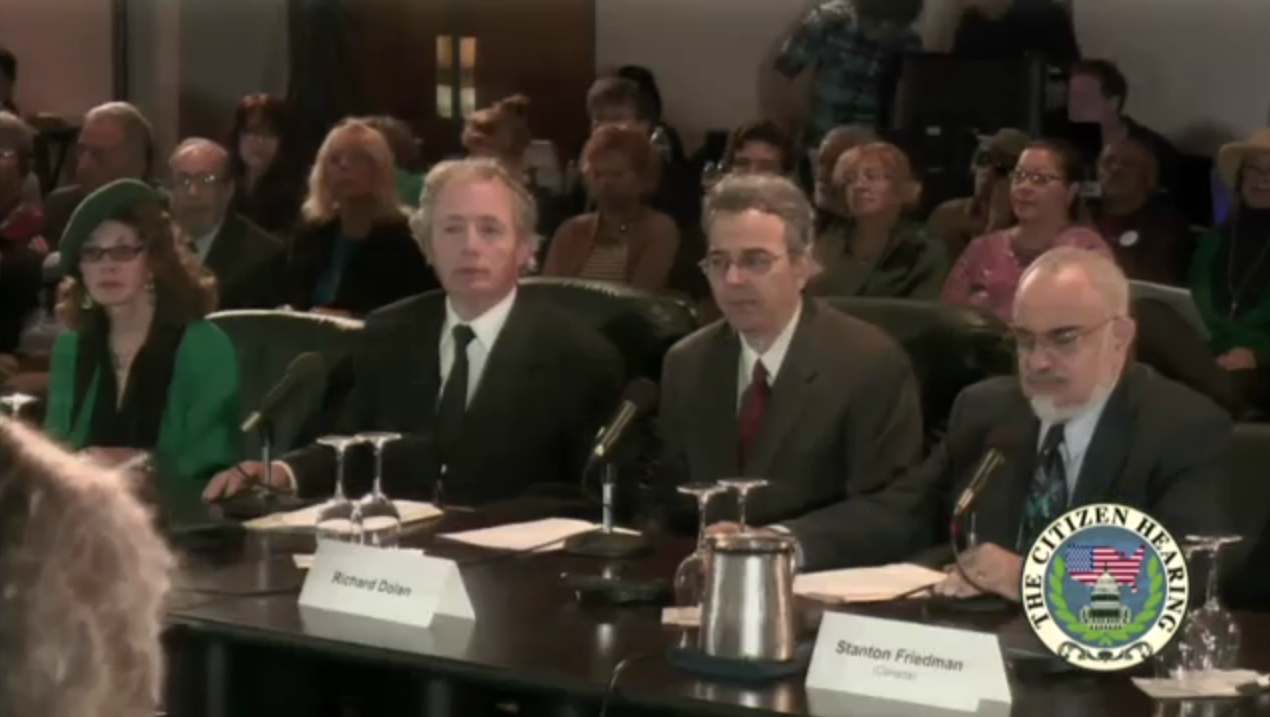 [This was during the opening moments of the Citizens Hearing on Disclosure, as we were taking an oath “That I hereby affirm, that I will tell the truth, and nothing but the truth, to the members of this committee today.” From Left to Right: Linda Moulton Howe, Grant Cameron, myself, Stanton Friedman].

The UFO problem has involved military personnel around the world for more than sixty years, and is wrapped in secrecy. Because this subject is so widely ridiculed, it is important to stress why it is worthy of serious attention.

Stories of strange objects in the sky go far back in time, but from the 1940s to our own era, military personnel from the United States and many other nations have encountered unidentified flying objects visually and on radar, sometimes at close range. These events happened not scores of times, but hundreds of times, and most likely thousands. 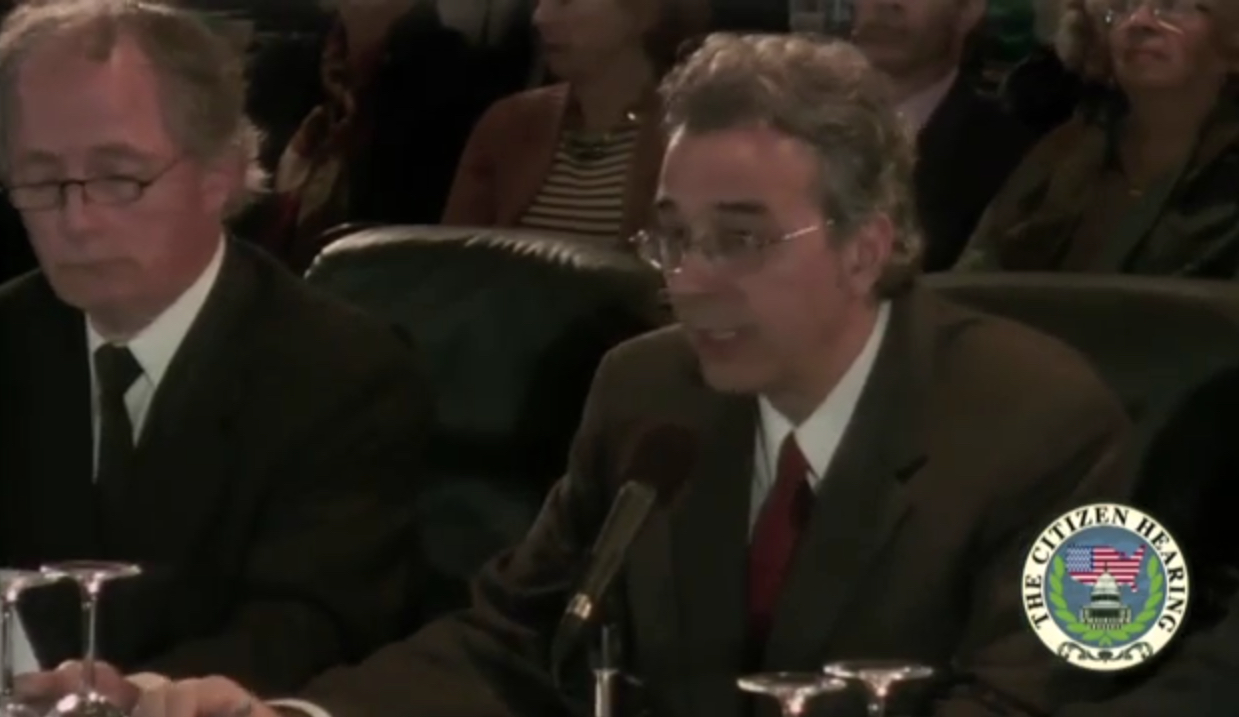 Sometimes, the encounter was nothing more than a solid radar return of an object moving at an incomprehensible speed, performing impossible maneuvers. Sometimes it included the violation of sensitive air space. Often it involved the dispatch of one or more aircraft to intercept the object. At times, crew members have claimed to see a metallic, disc-like object, sometimes with portholes, sometimes with lights, frequently engaged in what appeared to be intelligent, evasive maneuvers. In a very few cases, it appears to have involved the military retrieval of a UFO. In a few others, it involved injury and even death to military personnel. In a very large number of recorded instances, military personnel who encountered UFOs were adamant that they did not see a natural phenomenon.

This is clearly a serious development, and it has been treated as such by those groups charged with maintaining national security. The CIA, NSA, and all branches of military intelligence have historically received UFO reports and discussed the matter as something of serious concern.

And yet, the military and other branches of government have created the fiction, for public consumption only, that the UFO problem is nothing to be concerned about – certainly not the result of little green men.

We are fortunate that, starting in the 1970s, the U.S. Freedom of Information Act began to help researchers learn some of the truth that lay behind the facade of propaganda. We learned, for example, that some U.S. military analysts initially feared that the Soviet Union might be behind the “flying saucer” wave of the 1940s and 50s. They studied this possibility, but rejected it. They also rejected the possibility that these were secret American technology.

Indeed, options quickly narrowed. Either this was something real and alien, or it was something “conventional” but as yet unknown or unexplained. Already, by the end of 1947, a contingent of analysts at the Air Technical Intelligence Center (ATIC) at Wright-Patterson Air Force Base believed that UFOs were extraterrestrial. By the summer of 1948, this team prepared what they called an “Estimate of the Situation” stating the extraterrestrial thesis. The response: the team was dispersed and reassigned.

Yet, thanks to FOIA and the courage of a few senior officials to go on the record, we have a collection of statements about UFOs that are so numerous as to be impossible to mention all of them here. But a few might give you an appropriate flavor of what I mean.

This one is from General Robert B. Landry, Air Force Aide to President Harry S. Truman

“I was called one afternoon [in 1948] to come to the Oval Office – the President wanted to see me… . I was directed to report quarterly to the President after consulting with Central Intelligence people, as to whether or not any UFO incidents received by them could be considered as having any strategic threatening implications … .”

Landry went on to say that he continued to brief President Truman, in conjunction with the CIA, quarterly for the rest of the Truman Presidency. That’s no less than sixteen briefings. We might want to know why a man as busy as President Truman would take the time out of his schedule to have so many meetings about UFOs? And yet, we have no official transcript or record of these briefings.

This is a statement from a Top Secret 1948 Air Force Intelligence report, “Analysis of Flying Object Incidents in the U.S.”

“The frequency of reported sightings, the similarity in many of the characteristics attributed to the observed objects and the quality of observers considered as a whole, support the contention that some type of flying object has been observed…. The origin of the devices is not ascertainable.”

An Air Force Intelligence Report from 1951, relating to an aerial encounter by a U.S. fighter pilot:

[Object] described as flat on top and bottom and appearing from a front view to have round edges and slightly beveled … No vapor trails or exhaust or visible means of propulsion. Described as traveling at tremendous speed….

And, one more statement from the early years, this one from a former head of the Central Intelligence Agency, Roscoe Hillenkoetter, in 1960:

Behind the scenes, high-ranking Air Force officers are soberly concerned about UFOs. But through official secrecy and ridicule, many citizens are led to believe the unknown flying objects are nonsense.

How much clearer a statement should responsible citizens, academicians, media, and political leadership require before demanding to get some reasonable answers as to what is going on behind the scene in relation to the phenomenon of UFOs?

During the summer of 2002, just outside this city, over the town of Waldorf, Maryland, dozens of witnesses reported an incredible scene: multiple jet fighters chasing multiple, large, and unknown objects that were of blue and orange coloration. All the witnesses, two of whom I interviewed personally, and several of whom spoke to national media, described the amazing performance capability of these objects. The Air Force itself admitted it had scrambled F-16s to investigate unknowns, and admitted it had tracked at least one UFO on radar. We were told that the UFO simply disappeared from  the radar. The Air Force conclusion: it could have been “any number of things.”

What blue object can descend at an 80 degree angle, then stop, then reverse course, and then accelerate away from two F-16 jets?

Over Chicago’s O’hare Airport, in November, 2006, we saw the same kind of situation. A dozen United Airlines employees, including at least one pilot while on the ground, saw a hovering disc-shaped object below the clouds. It then accelerated away so suddenly that it left a hole in the cloud.

United ordered its employees to silence, but one of them reported the event, anyway. After denials by United and the FAA, both agencies were forced to acknowledge that, indeed, those individuals had made UFO reports. Again, we might ask: what might this have been, over one of the busiest airports in the world, and why the steadfast silence and denial?

These are only some of the better known recent cases. There are, in fact, an overwhelming number of them. The two largest websites for collecting North American UFO reports, the National UFO Reporting Center and the Mutual UFO network, have a combined total of well over 10,000 reports every year. Clearly, many or most of these would turn out to be something prosaic. But go through some of these reports. Many of them are truly incredible, and many of them have indeed received followup investigation. They are unexplained, and – at least by our conventional wisdom – unexplainable.

The combination of astonishing performance, powerful statements from selected senior officials, and steadfast silence and dismissal by our political establishment point to a problem. This is not merely the problem of cognitive dissonance. It is the problem a political system in which the wheels have fallen off the machine.

It is imperative in the name of science and responsible public policy that we get those wheels back on, and begin a genuine, open, investigation of this phenomenon. We demand and deserve answers from responsible officials who ought to be in the know. And if they are not in the know, we all need to investigate and find out just who is.