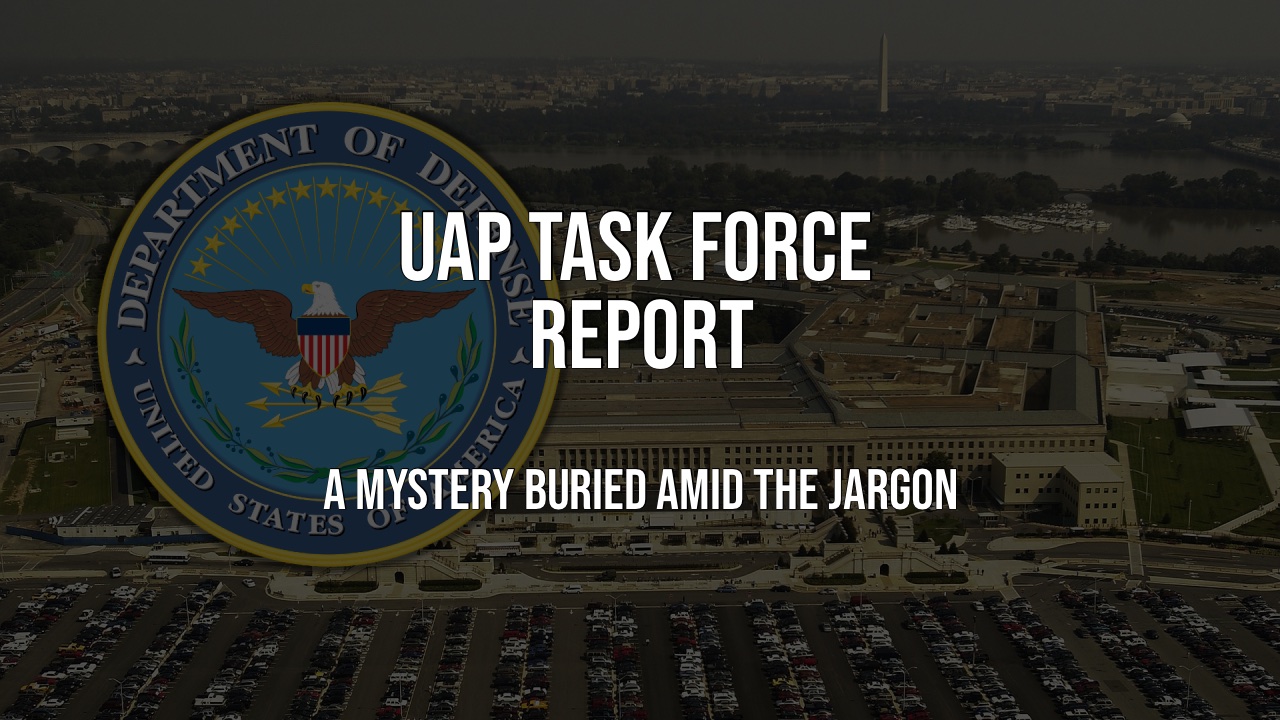 The entire paper is just nine pages long, and that includes the title page as well as two Appendix pages, which add nothing to the report. So it’s essentially six pages. I suspect that everyone who reads this, including anyone from the general public who lack any real knowledge of UFO/UAP, will be extremely surprised at how threadbare this report is. Granted, we were led some time ago to understand it would be thin, to say the least. And I was certainly not expecting anything substantial at this point, but even so, I must say I was expecting more than six pages.

Frankly, this report is an exercise in bureaucratic jargon, and the unclassified version at least clearly seeks to avoid providing much of any genuine information.

However – and this is a big however – there are very interesting tidbits buried in here. And indeed, despite the fact that this report studiously avoids trying to make any conclusions about UAP, it contains a potentially provocative conclusion. The only problem is that you have to lift out a few statements that are scattered in different sections and piece them together.

Point number one. Although the authors do not point to any specific culprit as being the primary source of these objects, they do state that they found no evidence that any of these objects were U.S.-derived technology. Of course, we knew this in advance, more or less, from the various media reports that already came out.

Point number two. But there is something else. The authors found no evidence that any of these UAP (144 reports, incidentally) came from Russia, China, or any other foreign nation.

Point number three. Furthermore, the report also states that these UAP are for the most part solid, real objects and surely appear to be technological.

Point number four. It’s also stated that these objects have caused a fair amount of havoc during U.S. military exercises and a number of near-mid-air collisions.

Point number five. Some of these objects apparently are puzzling in their flight characteristics and not easily explainable.

Each of these various statements are scattered throughout the report, easy for the casual reader to miss, typically buried within long-winded sentences and paragraphs.

But this report, despite its skimpy nature, opens up a potential public relations problem. After all, if not U.S. tech (military or industry) and not a foreign nation, and they appear to be solid and technological, and they cause an air safety hazard and a potential national security “challenge,” and they sometimes exhibit puzzling flight characteristics, then what are we talking about?

With that said, I’ll do a quick breakdown of the various (small) sections within the report, although it’s probably just as easy if you read the report yourself.

First is the “Scope and Assumptions” section, which merely states that this report:

“provides an overview for policymakers of the challenges associated with characterizing the potential threat posed by UAP while also providing relevant processes, policies, technologies, and training for the U.S. military and other U.S. government (USG) personnel if and when they encounter UAP, so as to enhance the Intelligence Community’s (IC) ability to understand the threat.”

Presumably whoever wrote this run-on sentence failed English Composition 101. Aside from that, we learn that the purpose of the report is not to explain what these objects are, but merely to provide an overview of the challenges of understanding a potential UAP threat.

In other words, there is no information in this report about any specific UAP/UFO event. This is important to recognize. There are no cases specifically described.

Which means that for the general public, at least, there is no information upon which to gain a clear picture of precisely what was examined.

The “Executive Summary,” provides a barebones summary of the following sections. But first, a disclaimer:

“The limited amount of high-quality reporting on Unidentified Ariel Phenomena (UAP) hampers our ability to draw firm conclusions about the nature or intent of UAP.”

Therefore, right away we see this report is not going to give us any firm conclusions about anything.

We also learn that this report covers the years 2004 to 2021, and apparently really zeroing in mainly on the last few years, following the codification of UAP reporting procedures as indicated by the United States Navy in 2019 (although there is no indication about the nature of those procedures). So presumably they looked at the Tic Tac case but never mentioned a word about it. Or any other case.

In this section, the report does state that:

While the report emphasizes that there are probably multiple answers to the UAP reports it investigated, only one actual case seems to have an explanation at all (a stray balloon that was losing air).

Two other statements are noteworthy. One is that UAP clearly pose a flight safety issue, and “may pose a challenge to U.S. national security.”

The other noteworthy statement in the Executive Summary is simply a call for better and more streamlined processes to screen and process UAP reports.

The next section, entitled “Available Reporting Largely Inconclusive” is perhaps the most interesting section of the report. Such as it is. Perhaps the most interesting piece of data we get is that there were 144 reports studied by the task force, all of which originated from US government sources. Of these, 80 reports involved observation with multiple sensors. Another interesting fact is that most of these reports were situations in which UAP interrupted preplanned training or other military activities.

Precious few details. We learned that in 18 incidents, observers reported unusual UAP movement patterns or flight characteristics. Some of these included the ability

“… to remain stationary in winds aloft, move against the wind, maneuver abruptly, or move at considerable speed, without discernible means of propulsion.”

Apparently a small amount of data seem to show “UAP demonstrating acceleration or a degree of signature management.” Like everything in this report, the language is ultra bureaucratic, vague, and really forces you the reader to go through a process of translation from bureaucratese into ordinary English. But with a little bit of work we get the idea that some of these objects demonstrated extraordinary flight characteristics.

And that’s essentially it for that section. No other real details to work with.

The next small section simply states that most of these reports very likely have one of five possible explanations, although no numbers or statistics are provided. The categories are:

This is interesting because I personally was wondering if they would include private contractors and the like, and apparently they are doing so here. The report does state,

“we were unable to confirm, however, that these systems accounted for any of the UAP reports we collected.”

It must be stated that this is not any kind of blanket denial that US technology is behind this. The report repeatedly emphasizes the lack of sufficient data, and does a consistent job of bowing out of any kind of conclusions. All they are saying here essentially is that they could not confirm that US technology was behind any of these reports. That essentially means nothing. They clearly were not ruling it out.

I believe this essentially contradicts earlier news reports that indicated this report had ruled out U.S. technology as a potential source of these reports. If I am not mistaken, this was a statement by Luis Elizondo. But from how I read this report, no such conclusion was made. They simply found no evidence.

Next potential category for UAP reports are:

The last category of potential UAP sources is simply called “Other.” And no, not a single reference or even hint that this could refer to anything extraterrestrial. For the authors of this report, it simply seems to refer to anything that requires “additional scientific knowledge” to study.

When you really read this section carefully, you find that it’s essentially empty of content. Even the title “UAP PROBABLY LACK A SINGLE EXPLANATION” gives me the impression that there was really no analysis performed. One gets the impression that they don’t even have an idea of what are the most likely explanations. Presumably the classified version of this report is a bit more sophisticated.

A short section relating to flight safety threats and potential national security “challenges” follows. We learned that the task force collected 11 reports of documented incidents in which pilots reported near misses with a UAP. That is interesting.

Under the subsection of potential national security challenges, we do get a very interesting statement. Easily lost in the shuffle.

“We currently lack data to indicate any UAP are part of a foreign collection program or indicative of a major technological advancement by a potential adversary.”

And there it is. Obviously none of these conclusions are even remotely definitive, but I find it very interesting that the report seems provisionally to discount U.S. technology and foreign adversaries as the source of these UAPs. Any logical mind is going to wonder about the implication. If not U.S., if not foreign nations, what are we left with? The question is not even asked. The implications are buried within the mass of bureaucratic language.

However, the report does state that a number of these UAP have been detected near military facilities or by aircraft carrying the U.S. government’s “most advanced sensor systems.”

The final section is a call for more money to go into UAP analysis, standardization of reporting procedures, etc. It states that the ability to collect these reports was severely hampered in earlier years, and really only started to become halfway decent in the last few years, following the U.S. Navy’s reorganization of the reporting process.

That’s essentially the report. Definitely a disappointment to anyone anticipating genuine data, much less images or video. But buried within this report, amid all of its qualifications, is the provisional conclusion that this phenomenon cannot be attributed to U.S. military or industrial technology, nor that of foreign adversaries. It furthermore states that these objects clearly appear to be solid and technological. You do the math.

Obviously the point of this unclassified version of the report is to bore the public to death about UAP, because despite the interesting tidbits in here, there is nothing even remotely exciting about this. The report would make an excellent sleep-aid. But despite the best efforts of the authors, there is something to work with here. The phenomenon is real, it’s technological, it’s an annoyance and potentially even a threat, some of the objects operate in ways that seem difficult or challenging to explain, and none of the cases examined pointed to the U.S., Russia, China, or any other nation.

My guess is that the classified version of this report will leak out soon enough. I have no inside information to that effect, just my best hunch. Someone will get the rest out to the public soon. Let’s see.

78 thoughts on “The UAP Task Force Report: A Mystery Buried Amid the Jargon”

Richard’s show started on KGRA back in 2012, and they still carry him. These are usually replays of Richard’s previous shows, many of them recent.  Join Richard as he discusses everything related to UFOs, global… Read More »
Feb
6
Mon
2023
8:00 pm The Richard Dolan Show
The Richard Dolan Show
Feb 6 @ 8:00 pm – 9:00 pm