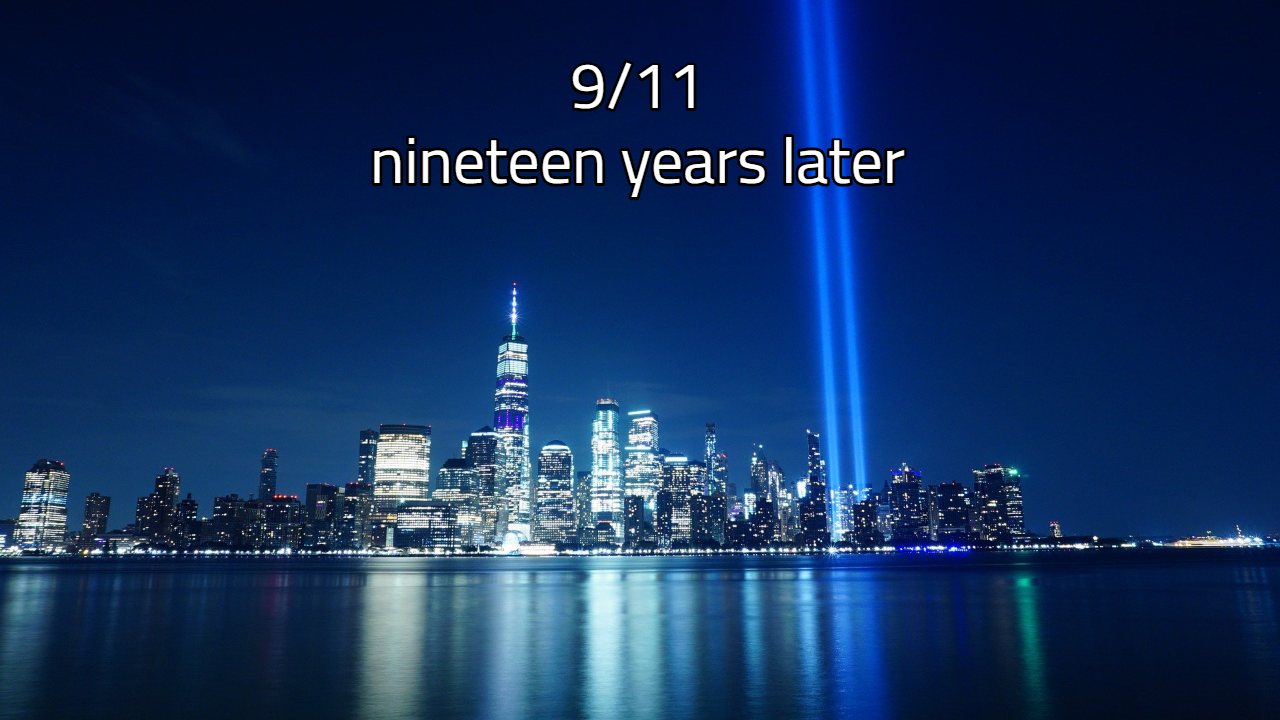 The older we get, the more time flies by. It’s hard for me to take in the fact that September 11, 2001 was nineteen years ago. It doesn’t seem like that long ago when I stood in the middle of my livingroom feeling shellshocked from having seen the towers come down probably twenty times that day. I can still remember that feeling of dread that came with the certainty that everything was going to be different from now on. Feelings that everyone shared.

And so we moved into a new dark place, never to go back. We all know that story.

On a personal level, I educated myself on the truth about 9/11 starting in late 2002. By 2004, I was talking about it publicly as a false flag. Of course, many people came before I did. Jim Marrs, for example, had researched 9/11 far sooner and far deeper than I ever did. But I do know I was one of the first UFO researchers to get into the entire 9/11 scenario, and I definitely caught some hell from other people along the way.

Even so, those were exciting times in a sense. For a while during those years, some of us thought that the researchers who were doing the serious work on 9/11 might be able to make some sort of breakthrough into the public awareness. Without a doubt, for a few years that alternative view that 9/11 was an inside job was gaining traction, year by year.

And then, somehow, all that stopped, and we went backwards. I don’t know when the trend reversed, when the 9/11 “conspiracy theory” went from being on offense to going on defense. But it definitely happened.

Thinking about it, it all happened during the Obama years. I still remember the feeling I had when Obama won the 2008 election. I am going to make a confession now: for a very short while, I allowed myself to believe that maybe he would actually be something different. As a candidate, he talked an amazing game, and was such a rock star on camera, I have to admit I got roped in for about a week and allowed myself to hope that he might have something to say about 9/11.

That was pure fantasy, of course, and once I regained my sanity and started to look at his cabinet choices (heavier Wall Street connections even than W. Bush), and then of course watching him cave to the Davos crowd within days of taking office and instituting the trillion dollar bankster bailout. I knew it was game over from a 9/11 Truth perspective. Oh well, it was a nice little dream while it lasted.

It was also during the Obama years that the vast consolidation of the new digital media became fully incorporated into the rest of the National Security State. Youtube and Facebook and the rest of them might have come into being during the W. Bush years, but it was during Obama’s presidency that those platforms turned into overt tools of empire. As was, we can assume, the plan all along.

So where this left us with 9/11 was in a place where the alternative perspective has been erased. This, despite the fact that there has been more than enough research over the years to prove that the official narrative we have been told is a lie and insult to our intelligence. And yet, none of that seems to matter. The 9/11 conspiracy theory has been cancelled.

The question arises, is it now even possible ever to get to the truth on 9/11, that is, in a public and open manner? I just don’t think we can, not any more. I think that ship has sailed long ago. There has been too much creation and consolidation of a massive, sprawling bureaucratic infrastructure, too much investment into the lie by every single establishment institution in our society, not just in the U.S. but everywhere. I just don’t think we can break the stranglehold that currently exists.

That’s not to say that people will never break it. But consider the assassination of John F. Kennedy. It’s been close to sixty years, and that truth is also swept aside and discussed in polite circles as a conspiracy theory. The reason isn’t hard to fathom: the truth on JFK’s assassination still matters, and therefore it can’t be acknowledged.

So it is with 9/11. The players are all mostly still alive, and the guys they work for are still the Masters of our Universe. So it won’t happen. No, 9/11 will be shoehorned deeper and deeper into its proper place, and several generations will come and go before a serious re-evaluation occurs. Not because finally enough evidence will have appeared by then, because we already had that years and years ago. Rather, 9/11 will be safe to discuss.

When might that be? Not until long after each one of us has left the stage. And not until the United States itself ceases to exist in a continuous form, when there is no longer an organized institutional effort to keep the party of lies going. Only then, and sadly, not before.

For those of us who care, there is every reason to keep talking about 9/11. We are keeping this conversation alive for the future, and that still matters.

Meanwhile we have other matters that are even more pressing. Whatever one thinks about the origins of the current iteration of the coronavirus, there is no question that the global reaction to it has been every bit as draconian as the changes we saw after 9/11. I know that all the public voices have consolidated into the bat soup theory, but my unscientific mind still tells me otherwise, and I will believe that virus was artificially manipulated until someone can prove it to me otherwise.

I realize people get emotional over this debate. As with 9/11, there has been a great deal of heroism by ordinary people who have dedicated themselves and have often sacrificed their health and their lives to help others.

And at the same time what remains of our old freedoms and old way of life gets further sliced away. And when will we ever revisit, if not the cause, than the outrageous reaction to this pandemic? I’m sure it will not be for a long, long time.

Meanwhile, light a candle in remembrance of those who died on 9/11, and also for those countless more who died in the Forever Wars as a result, and also for the six trillion dollars that the U.S. pissed away in the destruction of nations such as Iraq and Afghanistan. And finally for the dream that we all once had of a new and amazing world of instant information, deep research, and sharing of knowledge that was going to tear down the walls of oppression and lies.