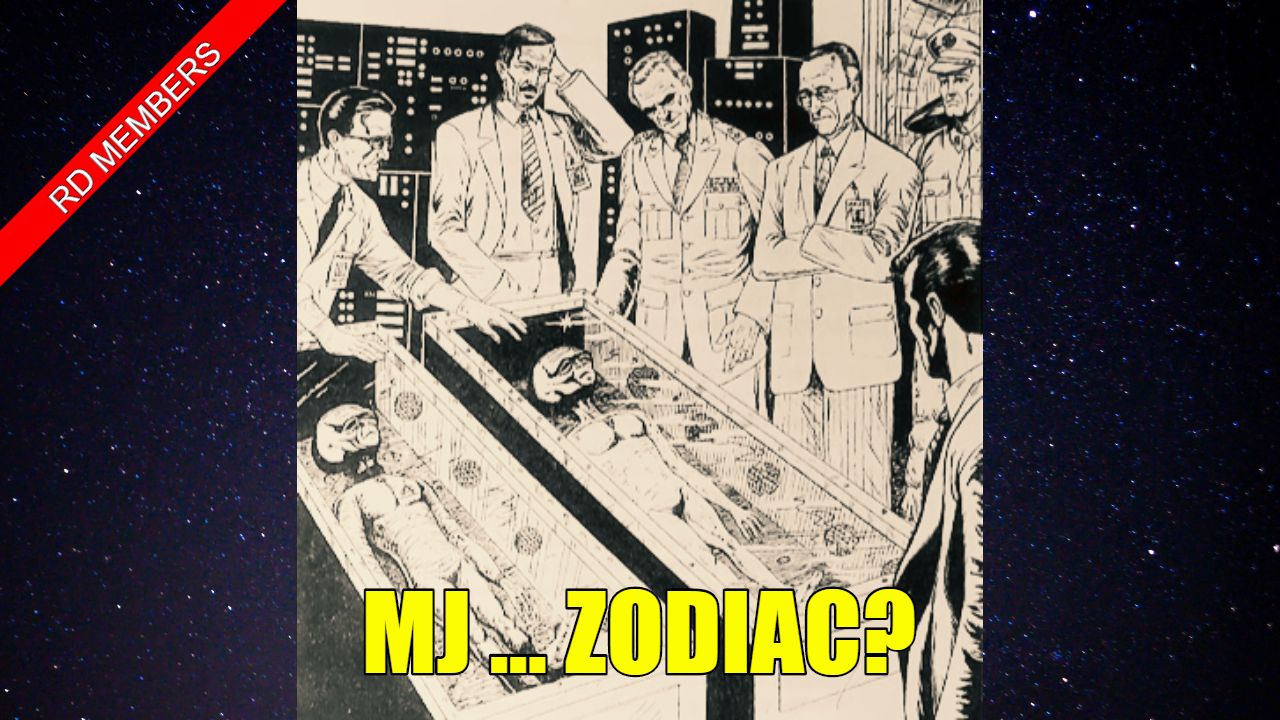 [NOTE: AUDIO VERSION OF THIS ARTICLE IS ABOVE]

In June 2019, several important documents leaked from the estate of the late Dr. Edgar Mitchell to the rest of the world. Most famously are the notes written by Dr. Eric Davis in 2002 following his meeting with retired Admiral Thomas R. Wilson. Understandably, those notes dominated our attention compared with all other items that came from Mitchell’s estate. They were the most interesting, by far. But the other noteworthy document which caused a brief flurry of discussion was the email thread among individuals in Robert Bigelow’s organization the National Institute for Discovery Sciences (NIDS) in their infamous, scandalous, how can this be! discussion of the Ray Santilli alien autopsy film. The participants of this thread included Dr. Kit Green, Dr. Hal Puthoff, Dr. Colm Kelleher, and Dr. Eric Davis, with a few others, such as Dr. John Alexander and Robert Bigelow, cc’d in the discussion.

Although a few people stubbornly insisted that all of these documents were hoaxes of one sort or another, most people by now realize the truth of the matter: they are genuine and authentic. I will remind skeptics that I received an explicit confirmation of the Alien Autopsy thread from Kit Green himself—and the most interesting on-the-record “no comment” imaginable from him on the Davis-Wilson notes. (I also mentioned that he gave me an explicit off-the-record statement which I have agreed to withhold). Needless to say, further disputes on the authenticity of either the AA thread or the Davis-Wilson notes are pointless other than for those people who want to talk themselves blue. The rest of us have moved on.

One element of the Alien Autopsy thread has gone completely below the radar. This was something mentioned on the very final page (11) of the thread. It’s a question by Hal Puthoff regarding an obscure series of articles that had been published not long before in UFO Magazine.

The email from Hal Puthoff to Kit Green and Kristin Zimmerman is dated July 31, 1999. [While most of the email thread contains messages from early 2001, the final two in the thread are from 1999.] The Subject line of Puthoff’s email is: Sedge Masters? Here’s what Puthoff wrote:

Just wanted to check. Didn’t I send you a pkg of UFO mag articles by pseudonymous (sp?) author “Sedge Masters,” concerning crash/retrievals by a group called Zodiac? If so, still hoping for a readout by you on this, as we have reason to believe the set of stories (3, I think) are only slightly fictionalized versions of a source’s experiences writing up records for the archives at WPAFB. Specifically, ever heard of Zodiac, which is supposed to be the true name?

Second question. Colm once mentioned that you had seen “real” autopsy records. Are you holding out on me 🙂

Notably, the AA thread contains Green’s answer from five days later in which he refers to the autopsy notes, but not to the Sedge Masters articles.

It is evident that Puthoff took the content of this article seriously, despite knowing it was a fictionalized portrayal of certain below-the-surface realities. So what exactly was he referring to?

A friend and research associate brought this entire matter to my attention a few weeks ago. Do you know what these Sedge Masters articles are?, he asked me. The fact was that I didn’t. It did not ring a bell. Fortunately, however, for the past two weeks I have been steadfastly going through a substantial collection of UFO journals and magazines in a final push to create a full chronological database for a proper approach to my third volume of UFOs and the National Security State.

(As an aside, this has been an incredibly productive two weeks and I am surprised at how much material I have been able to go through. The material currently includes the MUFON UFO Journal, the International UFO Reporter, a substantial collection of newspaper clippings, UFO Magazine, and several others. Of course, I have much, much more material that I have already gone through and a bit more that I will go through.)

So the timing of my friend’s inquiry happened to be perfect. I told him that I would make a special effort to keep an eye out for any reference to articles about or by a “Sedge Masters.”

Fortunately, I found them. As Puthoff recalled in his 1999 email, there were indeed three articles written in UFO Magazine in 1998 that concerned a fictional character named Sedge Masters. They are worth reading. (May/June 1998, September 1998, and December 1998.) The author of these pieces is a man named Greg Halifax. I knew nothing about him, in fact had never heard of him.

Halifax gets a brief author bio in two out of the three articles. The first one says:

“A writer-researcher for over 20 years, Greg Halifax lives in southern California. This is the first in an occasional series of stories that, while presented to us from seemingly trustworthy sources, are second- or third-hand anecdotes, and cannot be verified at this time. They should be weighed as such.”

The second article bio has a shorter statement:

“A writer-researcher for over 20 years, Greg Halifax lives in southern California. He has a number of good friends from the military-industrial complex.”

The third article offered no bio of Halifax at all. And that’s it. Interesting, and slightly frustrating from my perspective. There wasn’t even a comment on Halifax in any of the “Publisher’s Notes” and “Editor’s Notes” at the beginning of those three issues. In that magazine, these typically provided helpful commentary regarding highlights of each issue’s contents. In none of the three issues did either the Publisher or Editor-in-Chief make reference to these extremely interesting pieces. To be fair, those segments are always short statements, usually just a paragraph, and were never meant to be comprehensive. Moreover, UFO Magazine at that time was going through an especially strong phase with quite a lot of good and interesting journalism pertaining to the UFO subject. There was always a lot to discuss in those issues. Even so, it’s clear that Greg Halifax is somewhat mysterious. Who was this guy? No one seems to know.

The first article is preceded by this statement:

What you’re about to read is largely unverified… But that doesn’t mean it’s not true. It’s the type of UFO information that would typically be deeply buried, then carefully studied and compartmentalized by a small faction within the intelligence community, as suits any sensitive black operation. As such, straightforward corroboration is difficult at best. But UFO Magazine has the advantage of more than a decade’s worth of collected bits of information and broad-based facts on which to construct some fair extrapolations. Drawn from a range of sources, the following incident reflects upon one of the blackest American covert operations that deal directly with the UFO phenomenon.

The story follows a CIA covert ops specialist by the name of Sedge Masters, who had done a great deal of sensitive work around the world—a very tough James Bond type of spy. He had assumed he’d seen it all. But now he’s brought in to provide services for the ultra-secret UFO crash retrieval program. He learns that he has been selected for his personality traits even more than his substantial technical expertise in a number of areas. He’s been asked to serve as an investigator and interview interrogation specialist to determine what went wrong in the most recent crash retrieval operation. As it turns out, according to the information he learns, ninety minutes have been unaccounted for by everyone in the nearly 70-man team. The team and their supervisors are mystified.

Masters is taken to an ultra secure facility and is given a briefing document to read. It discusses the history of the UFO phenomenon as the higher-ups see it. I won’t describe it all in detail here (PDF attached below) but suffice to say it is a well-put-together summary, and you can almost believe this is how they might have portrayed it. One interesting tidbit is that the briefing document does not identify the name of the UFO control group as “Majestic 12” or “MJ-12,” although “the popular literature bandies” those names about. Instead, the briefing document states, the name is actually Zodiac.

By the late 60s, Zodiac had been able to recruit members of an elite recovery team. Sixty-seven well-trained men were dispatched to the sites of crash landings, and had by the 1970s perfected the tasks of completely and thoroughly documenting all actions and cleaning up any debris remaining after these incidents.

These men always comply with strict directions to document practically every single minute of these operations. They are debriefed immediately after each operation. This time, it’s become clear to our debriefing teams at Wright-Patterson that the first members questioned could not account for an hour and a half’s worth of time spent at the site. The pattern of forgetfulness was exact with every one of the other 66 team members at the site.

Most of the second article focuses on the interview of the Colonel in charge of this operation by Masters and a psychologist. The Colonel’s memory also was blank for the critical 90 minutes. It then turns out the following day after the interview, he and the rest of the team were suddenly able to remember the incident. As the Colonel put it, it’s because “THEY allowed it.” They being “the aliens on the ship.” And yes, a very large alien craft intervened during the recovery operation of the smaller UFO they had in their possession.

The third article follows Masters on assignment to investigate matters relating to an underwater UFO and a luminous sphere incident. He learns that the UFO community has undercover operatives working within to relay all important information to the proper channels, including a hypnotherapist that he meets. He is also shown a genuine alien craft that was acquired in a previous crash retrieval that no one has figured out very much about, even after a number of years.

What makes these articles interesting is the combination of a more than solid grasp of the UFO phenomenon along with obviously detailed knowledge of the workings of the classified world. Of course, I myself have zero direct experience with that world, but over the years through enough research and via private conversations, I can say that everything portrayed in this regard seems extremely plausible to me.

I will close by adding that I made some inquiries to various people out there to get any information about this. I am being careful here with what I say. However, I will definitely say that while I did not receive an explicit “yes” on the truth and authenticity contained within these articles, I believe that I was very much given to understand that it is legitimate. This includes the matter of Zodiac, although again I personally did not get that explicitly confirmed. It’s frustrating and I am sorry. But I can only give what I get. Everything is maddeningly one of those “read between the lines” situations. This is one of them.

I also think it is quite obvious that Greg Halifax is a pseudonym, as is “Sedge Masters.”

The material is enclosed as a PDF file. I took very sharp photos of these pages but somehow in the conversion the print is not super sharp. It is still quite readable. It shouldn’t be hard. Meanwhile, if I find a way to tweak my methods, I will come back with a premier version.

NOTE: HERE IS THE LINK FOR THE PDF OF THE THREE ARTICLES