Richard discusses the original authors and researchers in ufology in Shadows Of Your Mind Magazine, UK 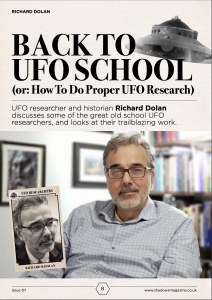 “BACK TO UFO SCHOOL (or: How To Do Proper UFO Research)”

“The great thing about taking a year or so off from producing this magazine was that it allowed us to have a clear out of the many books on ufology we had accumulated. 50 Shades of Greys? Gone. Selected by Extraterrestrials? Gone. The Ra Material? Gone, gone, and thankfully gone. And very cathartic it was too. What we were left with were those books by researchers who had been there, and done that, long before the late William S. Thompkins had even conceived of writing about blonde buxom aliens in Mary Quant skirts, whispering sweet nothings into his ear while he was allegedly drawing spaceships for Douglas Aircraft Company.

We’re talking about the boots-on-the ground researchers here. Investigators who meticulously recorded public and military UFO sightings. Authors whose work documented a period in our history and still stands up today as the best investigations into the mysteries of UFOs. We are talking of course about people such as Jacques Vallée, Dr Allen Hynek, Major Donald Keyhoe, and all the other OGs of UFO research. It was while re-reading some of these books that we had a bit of an epiphany. We needed to go back to UFO school! Reading books is all well and good, but we needed to speak to someone who could fill in the gaps. Somebody who is a kindred spirit to the great UFO researchers of the past, a published authority on UFO history and a veritable gold mine of information. We thought for a bit as the light bulb flicker… we needed to speak with Richard Dolan.

“Donald Keyhoe was my entry point, into UFO subject back in the early 90s when I became interested in the subject because I really knew nothing. I was determined early to get as much of a factually-based narrative and chronology as I could. And I thought well how do I do that? I needed to go back to the original researchers, and I didn’t even know who they were initially. I learned about Keyhoe, Captain Edward Ruppelt and some of the others we’ll talk about later. “I think it’s fair to say that without Donald Keyhoe there would not have been Ufology as we understand it. Throughout much of the 1950s; he opened the door. When you think of a classic UFO book of the 50s like Edward Ruppelt’s Report on Unidentified Flying Objects – which is a great book by the way – by the time Ruppelt did that book Keyhoe had already written three books and had opened the entire narrative of flying saucers/UFOs to the public which had gone even further than Ruppelt ever went…”

– To read the full article, follow this link: https://cdn.website-editor.net/bf0f08f8442947ce992d0fcb3a55249c/files/uploaded/ShadowsOfYourMind_ISSUE_7.pdf 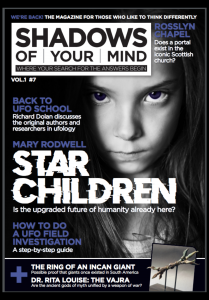